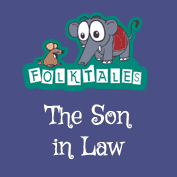 Once, there was a man who lived in a village. He was old and very ill. His daughter lived in another village and was married to a deaf man named Ramu. When her father fell ill, the daughter asked her husband, Ramu to go and visit her father and ask him about his health. Since Ramu was deaf, his wife wrote instructions on a piece of paper to make him understand what exactly he was to do and say.

She gave him these instructions, “Buy some fruits before going to see my father. Then, on meeting him, ask him how he is. He will say that he is well. Then, ask him which doctor is treating him and when he replies, say that that is indeed a good doctor. He will be pleased with you for having come to see him. Thank him and say that you will visit again soon.”

With these instructions in mind, Ramu set out for his father-in-law’s house. On reaching the village, first he went to the market to buy fruits. He started looking for some cheap fruit to buy. Apples, oranges, bananas were all too costly. At last, he found an old woman selling ripe chillies. These were quite cheap so Ramu bought a bag full of them.

On meeting his father-in-law, Ramu asked him how he was. The father-in-law replied that he was not well. Then, Ramu asked him which doctor was treating him. The father-in-law was in a bad mood because of his illness and also because of the chilli incident. He replied, “Doctors can’t help me now. I am just waiting for Yama, the God of Death.” But Ramu could not hear the reply. He said, “He is a very good doctor. You should go to him.” This made the father-in-law very angry. He said, “You fool! Go away and never come back here.” Ramu calmly replied with the answer he had rehearsed, “I’m glad you like me. I will visit you again soon.” Happily, Ramu walked away while his father-in-law kept shouting at him furiously.

This story tells us that all people cannot do all things. But if we pretend or tell lies, we will only be causing sadness to others around us.