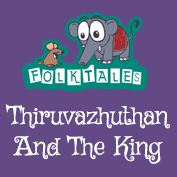 A long time ago, there was a king in Cochin who had a foolish servant named Thiruvazhuthan. The king had nicknamed him Thiru.

One day, the king ordered Thiru to get some buttermilk from the market. But Thiru was a fool and did not know what buttermilk was. He asked the king, “Sir, please tell me what buttermilk looks like.” The king was surprised but he said, “It is white in colour and if you leave it, it runs.” He meant that if you pour buttermilk on the floor, it will run.

Thiru went out and started looking for buttermilk. But he could not find such a thing anywhere. Finally, he came across a crane that was flying near a pond. He quickly trapped the crane and took it to the king in a closed pot. The king wanted to see the buttermilk but Thiru insisted that it would run on opening the lid. But the king made him open the pot and at once, the crane flew away. Thiru said, “See, I told you it would run. And it was white, too!” The king was very angry at Thiru’s foolishness.

A few days later, the king asked Thiru to bring him an ash gourd. “How can I identify it?” asked Thiru. The king replied, “It’s easy. It will have white powder all over it and you will find it on a rooftop.” The king said this because in those days people used to grow ash gourds on their roofs. So, Thiru started searching for an ash gourd. After quite a long search, he found a man on the roof of his house. He was repairing the roof. Before repairing it, he had been whitewashing his house and so he had patches of white all over him. Thiru had the man caught and put him in a bag. Then, he went to the king and said, “Sir, I have brought you an ash gourd but it keeps shouting.” The king was perplexed. He came and saw the poor man tied inside the bag. He set the man free and beat Thiru for his foolishness.

Many days passed. Then, one day, the king called Thiru and asked him to fetch the priest. Thiru asked, “What would he look like?” By now, the king knew what a fool Thiru was. He explained, “He would be big. There will be a lot of his followers around him who would be surrounding him, chanting.” Thiru left in search of the priest. After a long and tiresome search, he came across a dead buffalo. There were a lot of crows making a noise around the dead buffalo. Thiru reached the conclusion that this must be the priest and ordered the servants to carry it to the palace.

Then, he went before the king and said that he had brought the priest. The king gave him a lot of oil which the priest could apply all over his body and then take a bath. After some time, Thiru came back to the king and said, “I need some more oil, Sir. I have applied oil to the priest’s body but his horns are still left.” The king was completely astounded on hearing this. He rushed to see what Thiru had brought. When he saw the dead buffalo lying there, he was filled with rage. He immediately dismissed Thiru from his service.