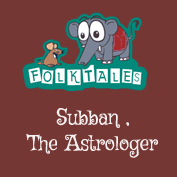 There was a man called Subban who lived in a small village near Thanjavur. He was extremely lazy and never did any work. His wife with pleaded him to do some work and earn some money for the house, but her plea simply fell on deaf ears. One day, Subban saw his wife taking a loan of Rs. 10 from her friend. She hid the 10-rupee-note inside the rice tin, so that Subban could not find it. But the wife was unaware that Subban was already watching all this from a distance. Subban went to a nearby temple and smeared his forehead with three white lines and one red dot of kumkum and came back home.

Subban’s wife was shocked to see him like that. She asked him, “What are those marks on your forehead?” Subban replied, “I went to the temple and God has blessed me with the power of astrology. Now I can predict the future.” The wife did not believe him. Subban said, “I am aware that there is a ten-rupee-note which you borrowed from your friend and it is kept inside the rice tin.” The wife was very surprised to hear this. She went and shared the incident with her friend. Her friend said, “I will be making some dosas for dinner. If, after dinner, your husband can tell us the number of dosas I made, then I will believe you. The wife went home and told this to Subban. Subban immediately went out and hid behind the bushes overlooking the friend’s kitchen. Subban knew that for making a dosa, oil needs to be added twice into the pan and each time your pour oil on the heated pan, it made a sound, ‘soi’. So, Subban counted the number of times the sound was made. It was 20 times. When his wife and her friend came back home after dining, he told her that she made 10 dosas. The wife now started believing that Subban was indeed blessed with astrological powers and her friend told everybody about the accuracy of Subban’s predictions.

The following day, one of Subban’s neighbours came running to him and said, “I can’t find my goat since yesterday, everyone says that you have astrological powers. I will give you 50 rupees if you can find my goat.” Subban said to his neighbour, “I will try to find your goat, but I need to do puja for the whole night to find it. Now you go away and let me do my job.” As soon as the neighbour left, Subban began searching for the goat in the nearby villages and forests. Finally, he found the goat eating fresh grass from a patch at the edge of the forest. He caught the goat and tied it to a banyan tree behind a village temple. The next day when the neighbour came, Subban said, “I had to perform a very difficult puja and finally I found your goat. You can find it tied to a banyan tree behind the temple of Lord Shiva.” The neighbour found the goat. He gave Subban 50 rupees and went home happily.

Another time, the wife of a very rich man called Sharma, lost her diamond bangle at home. He was very upset and came to Subban for some help. The man offered Subban a sum of 1000 rupees if he found the bangle. Subban asked everyone to leave the house so that he could perform the puja in the house. As soon as everyone left, he turned the house upside down and searched for the bangle in every possible place. Finally, he found the bangle on the platform below the sink. The next day he handed over the bangle to Sharma and took the sum of 1000 rupees from him.

Days were passing and Subban continued to earn money like this. One day, there was a robbery in the palace of the king of the nearby town. All the ornaments of the queen were stolen in the robbery. The king was extremely distressed when suddenly one of his courtiers told him about Subban’s ability to find things. The king immediately called for Subban. The king ordered Subban, “You will have to find all the ornaments of my wife that were stolen. If you find them, I will give you a million rupees, but if you fail, I will have your ears and nose cut off.” Subban was terribly scared. He was aware that he could not find the ornaments of the queen. He needed some time to think so he said to the king, “There were a lot of ornaments, so I need to perform a very special puja for that. It will take 41 days to perform the puja. No one must enter the palace temple while I perform the puja. Only the servants will be allowed to come in with the flowers for the puja.” Subban had never done a puja before and thus, was not aware of any mantras. So he stared chanting, “Kathya nama, mookya nama”. In Tamil, ‘kathya’ means ears and ‘mook’ means nose. Subban was scared of losing his ears and nose and was, thus, chanting these words. The king had two servants by the name of Kathappa and Mookamma, who had actually stolen the jewellery of the queen. On hearing the words that Subban was chanting, the servants thought that Subban was aware of their deeds. They got extremely scared and confessed to Subban. They even offered a sum of 10 lakh rupees to Subban to prevent him from telling the truth to the king. Subbban agreed and said, “I will not tell the king anything, but you must return all the jewellery and go away from the palace forever.” The servants agreed. The next day, they returned all the jewellery and left the town forever.

After a couple of days, one night when the whole town was sleeping, Subban took all the jewellery and buried it below a tamarind tree inside the palace. Forty-one days had passed and the king asked Subban to hand over the jewellery to him. Subban said, “This was the most difficult puja that I have ever done. The queen’s ornaments were stolen by a devil residing on the tamarind tree located at the south of the palace. I found the jewels but the devil made me promise that I should never practice astrology again.”

The king was very impressed with Subban and gifted him a palace and 20 lakh rupees, as Subban said that he could not practice astrology anymore. Subban, thus, continued to live in luxury for the rest of his life without doing any work.