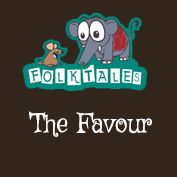 Lalu the wolf lived in the forest of Himalayas. He was extremely selfish and mean. He never cared about anyone else and was only concerned about his own well-being. All the other animals hated him and avoided him as much as possible.

One day, Lalu went hunting all by himself. He was very hungry and could not find a prey for a very long time. After a long search, he finally saw a wild hen. He pounced on it and at once tore it into pieces. He was eating it hungrily, when suddenly a small piece of bone got stuck in his throat.

Lalu was in extreme pain; he coughed and coughed, but still couldn’t manage to take the bone out of his throat. After a while, he became red and was almost choking. He pleaded with the rest of the animals, “Please take this bone out of my throat or else I will choke to death.” But none of the animals were willing to help him.

When Lalu noticed that no one would come forward to his rescue, he said, “Please help me, and I would give you anything you want.” But still no one came to him, they all knew that he was mean and would not give anything to anyone once he was fine.

Mother Crane however felt bad for him and decided to help him. But she wasn’t sure if Lalu would give her anything. All she wanted was Lalu to become a better wolf and not be mean and selfish.
The crane put her long beak into his throat and took out the bone. Lalu was relieved. The mother crane then said, “Now will you give me whatever I want?”

“Ha Ha,” grinned Lalu, “You came out safely even after putting your neck inside a wolf’s mouth, what else do you need? Be content that you are alive,” Lalu said and went away from there.
Mother Crane became sad, and decided never to trust the wolf again.