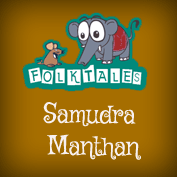 The garland fell and Airawat, Indra’s elephant, trampled it. Overcome with anger, Maharishi Durvasa cursed Lord Indra, king of the Devas, that he and all the Devas would lose their power.

Soon a war broke out between the Devas (demi-gods) and the Asuras (demons) led by King Bali. The Devas, now powerless, lost their control over the universe. Panic stricken, the Devas ran to Lord Vishnu for help. Lord Vishnu told the Devas that they could regain their powers only if they consumed the magical nectar, amrit. But it was not that easy.

Amrit was in the ocean and to bring it out, the oceans had to be churned. The Devas were powerless and knew that they could never churn the oceans by themselves. Lord Vishnu gave the solution that the Devas should form an alliance with the Asuras, promising to give them an equal share of amrit.

Lord Vishnu’s plan was followed to the word and the Asuras accepted the attractive offer made by the Devas. To churn the ocean, a huge mountain, Mandara, was used as the pole.

To give stability to the pole, Lord Vishnu took his second avatar of a tortoise, Kurma, and placed the mountain on his back. The huge snake, Vasuki was used as a rope and was tied to the mountain.

The Devas and the Asuras started pulling the snake from either side and hence churning the ocean. The first thing that came out of the ocean was not the life-giving amrit but life-threatening poison, halahal. This poison had the ability to destroy all of creation.

The Devas and the Asuras prayed to Lord Shiva to help them. Shiva drank all the poison but did not swallow it and saved all creations from destruction.

The Asuras now became selfish and snatched away the pot of amrit from Dhanvantri and refused to share the amrit with the Devas. A war broke out between the powerless Devas and the powerful Asuras. Lord Vishnu came to the Devas’ rescue, disguised as a beautiful maiden, Mohini.

He took away the amrit by deceit and gave it to the Devas. While drinking amrit, the moon and sun gods noticed two Asuras, Rahu and Ketu, disguised as Devas drinking amrit. They informed Lord Vishnu who used his Sudarshan Chakra to cut off the heads of Rahu and Ketu.

As Rahu and Ketu had just drunk amrit, their heads remained immortal but their bodies died. To this day, Rahu and Ketu take revenge on the  Sun and Moon by eating them on eclipses. The Devas drank the amrit and again became powerful. They regained their control over heaven and earth.