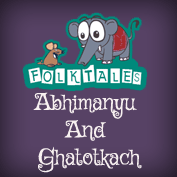 Abhimanyu and Ghatotkach are two important characters in the epic, Mahabharata. Both of them were the sons of two great Pandava warriors—Abhimanyu was Arjun’s son while Ghatotkach was Bheem’s son—inheriting their lineage from Lord Indra and Lord Vayu respectively. Although both of them were Pandavas,they had different mothers. Ghatotkach’s mother was Hidimba, demon queen of Himbavana and Abhimanyu’s mother was Subhadra, Lord Krishna’s sister and princess of Dwarka.

Along with being Pandavas, Abhimanyu and Ghatotkach shared many other tremendous similarities. Both of them were born during the period when their fathers were in exile. While Bhim and Hidimba married after Bhim slayed Hidimba’s elder brother, Arjuna married Subhadra after kidnapping her from Dwarka. Both Abhimanyu and Ghatotkach grew up near their mothers and away from their fathers. Both were furious fighters and were aware of all astra and shastra vidya. They were considered even better than their fathers in courage and power. While Ghatotkach was better than Bhim in wielding the mace, Abhimanyu was better than Arjun in archery.

Both took part in the Mahabharata War and wreaked havoc on the Kaurava army but died tragic deaths. When Kauravas were seeing destruction in front of them in the form of Abhimanyu and Ghatotkach, then Drona,the teacher of Kauravas and Pandavas, took over the charge of the Kaurava army. This five-day period is known as Drona Parva. Under Drona’s guidance, the Kauravas succeded in killing both Abhimanyu and Ghatotkach. Out of the two, Abhimanyu died first—on the thirteenth day of the war. He faced the challenge to break the chakravyuh designed by Drona. When Abhimanyu was in Subhadra’s womb, he had heard his father explaining how to break into the chakravyuh but he could not hear how to break out of it as his mother fell asleep. Showing his courage and valour, Abhimanyu broke into the Chakravyuh but got trapped in it and died. Grieved by his son’s death Arjuna took an oath to take revenge in a day or commit suicide.

Ghatotkach died next, on the 14th day of the battle. Karan had an astra called Shakti given to him by Lord Indra and was saving it to kill Arjuna but when he saw half-rakshasa Ghatotkach destroying his army, he used Shakti Astra on Ghatotkach hence killing him. Bhim killed thousands and thousands of Kauravas to take revenge for his son’s death.

Both Ghatotkach and Abhimanyu showed courage in the face of death and laid down their lives for the cause of truth and righteousness.