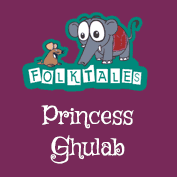 Once, there was a king who reigned over the kingdom of Kalyani. The king and queen lived very happily but their only sorrow was that they did not have a baby. Every day, they used to pray to God to grant their wish of having a baby. One day, the queen was going to the temple with a basket of fruits when she came across a sage sitting near the temple. He said to the queen, “I am hungry. Please give me something to eat.” The queen immediately gave him all the fruits that she had brought to offer in the temple. The sage was pleased and said, “I will pray to God for you. Tell me what you want.” The queen replied, “Please bless me that my wish of having a baby comes true.” The sage blessed her and went away.

After a year, the king and the queen had a baby girl. They had magnificent celebrations on the occasion. The baby girl was named Ghulab after the name of the flower rose. The king and queen also arranged for a feast for sages. They invited twelve sages and had arranged for a golden table for each of them. But thirteen sages came to the feast so one of them could not get a golden table. This sage became furious and cursed the baby girl saying, “When Ghulab turns sixteen, she will prick her finger by a sewing machine and will sleep for one hundred years.”

The king and queen became very concerned. They ordered for all sewing machines to be removed from the kingdom. Ghulab grew up into a beautiful princess. On her sixteenth birthday, a huge feast was given. Ghulab was happily roaming around in the palace when she found a strange room she had never seen before. She also heard a strange sound coming from behind the door. Ghulab opened the door and saw an old lady using a sewing machine. Ghulab had never seen a sewing machine before so she started inspecting it out of curiosity. But the needle of the sewing machine pricked one of her fingers and she immediately fell into a deep sleep. At that moment, not only Ghulab, but the entire kingdom—the king, the queen, all the people, animals, birds—all fell asleep.

Years passed and slowly a forest grew over the kingdom. It came to be known as Ghulab forest. It had a reputation of being strange and people avoided going there. After a hundred years, a prince called Vikram came to that forest. He was amazed to see that everyone and everything that he saw was in a deep sleep. He came to the palace and entered it. Here, too, he saw that the king, the queen, the servants, courtiers—all were sleeping. He went on looking and finally he came to the strange room with the sewing machine. Here, he saw Princess Ghulab sleeping. He thought that she was a lovely girl. He held her hand and kissed her wounded finger. Ghulab woke up and saw the prince. She also liked him a lot. By this time, the whole kingdom had woken up from their hundred-year sleep. Everyone thanked Prince Vikram. Vikram and Ghulab were married and lived happily ever after.