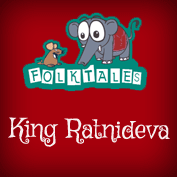 King Ratnideva was well known not only on Earth but also in heaven for his helpful nature and selflessness. Ratnideva never attempted to earn anything for himself. He was happy with whatever he got by fate and when atithis (guests) came, he would not hesistate to give away all that they needed.

He gave away everything he had to the needy and underwent great suffering along with his family but he never complained. Even when he and his family members did not get food or water, Ratnideva was always satisfied. After fasting for forty eight days, one fine morning Ratnideva received some water and food .Just when he was about to eat, a brahmin arrived.

As Ratnideva believed that God was present everywhere and in every living being, he treated his guests as God. He received the Brahmin with warmth and respect and offered him a share of the food. The Brahmin ate his share and left the place satisfied. Ratnideva then divided the remaining food among all his family members. When they were about to start eating, another atithi, a shudra (low caste) arrived.

Seeing the guest, King Ratnideva generously offered him a share of food.

When the shudra went away, another atithi arrived, surrounded with dogs and asked the King for some food and he and his dogs were very hungry.

With great respect, he offered equal portions of the remaining food to the guest and his dogs. Thereafter, drinking water that could satisfy only one person remained. Just when the king was about to drink it a Chandala(Hindu lower caste) appeared and asked him for some water, though he was a low born. Sad at the poor exhausted guest’s pitiable words, King Ratnideva gave all the water to the thirsty guest. Although, he was on the verge of death because of thirst, he still selflessly gave away his share of water for he was naturally kind.

Suddenly the Trimurti (Lord Brahma, Lord Vishnu and Lord Shiva) appeared before him, pleased at his charity and blessed him. They then revealed that they had visited the king in the form of the Brahmin, Shudra and Chandala to test his compassion, kindness and pity.

As Ratnadeva was an ardent devotee of Lord Krishna and was free from all materialistic desires,the materialistic world could never lure him. All those who followed King Ratnideva’s principles became pure devotees and the best of yogis.