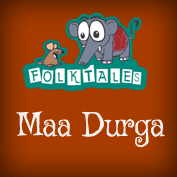 Durga is a fierce form of Devi in Hindu mythology. She is the incarnation of the Mother Goddess, a unified symbol of all divine forces, the all powerful almighty goddess.

Durga, the goddess of power and strength, is perhaps the most important goddess of the Hindus. She is a multi-dimensional goddess with many names, many personas,and many facets. There is an interesting tale of the vicious battle between goddess Durga and Mahishasura.

Mahishasura, the buffalo demon, meditated for years and after his hard and long penance, he pleased Lord Shiva with his devotion. Lord Shiva blessed him with a boon that no man or deity would be able to kill him. Mahishasura, now protected by the boon, grew extremely proud. He became invincible and killed innocent people ruthlessly. He even attacked the abode of the gods. The war between the gods and the demons lasted a hundred years, in which Mahishasura was the leader of the asuras or demons and Indra was the chief of the gods. The gods were defeated by the more powerful demons and Mahishasura became their leader.

Conquered by the demons, the gods went and asked for Lord Shiva’s help. Shiva asked all the gods to release their energies forming the pure energy of godhood. They all joined their energies and the powerful band of lightning that emerged from the gods led to the creation of a young, beautiful female with ten hands, Goddess Durga. The gods called her ‘the invincible one’ and gifted the goddess with their weapons and other divine objects to help her in her battle with the demon, Mahishasura.

Thus armed, Durga rode on a lion to the top of a mountain and a fierce battle took place between Mahishasura and the goddess. At last he fell dead and the scattered surviving remnants of his once unbeatable army fled in shock.The most important form of Durga is as Mahishasuramardini or the slayer of Mahishasura, the buffalo demon.