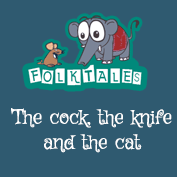 Once, there was a poor farmer who had three sons named Bhola, Sola and Tikku. When the farmer became very old, he called all his sons and said, “I worked hard all my life but all I could earn was a cock, a knife and a cat. I am giving the cock to Bhola, the knife to Sola and the cat to Tikku. Go out in the world with these things and try to earn some money.” The three sons took these things and promised their father that they would do their best.

First, Bhola went out of the village with the cock. After traveling for many days, he reached an island where nobody knew about cocks. Since there were no clocks in those days, the people of the island had no proper idea about time. They used to wake up late in the afternoon when it was too hot for them to work in the fields. Bhola told them that he had a magical bird that made a loud sound every morning with the first rays of the sun. They could hear it and wake up and go to work. The people of the island were very impressed. They asked Bhola how much he would sell the cock for.Bhola replied, “As much gold as a donkey can carry.” So,the people bought the cock and gave Bhola as much gold as a donkey could carry. Bhola took the gold happily to his father.

Then, Sola set out with his knife. Everywhere he went, people already knew about knives. Finally, after a long and tiresome journey, he reached an island where nobody knew about knives. So, it was very difficult for them to cut wood or harvest grains. They did everything by hand which was very difficult and time consuming. Sola told them that he had a magical device that would make their work a lot easier. When he showed them what all could be done easily with the knife, they were very impressed and wanted to buy it. They asked Sola the cost of the knife. Sola replied, “As much gold as a horse can carry.” So, the people of the island bought the knife and gave him the gold.He went back home with the gold.

Now it was Tikku’s turn. He set out with his cat. But wherever he went, there were already many cats around so people did not value cats. After traveling far and wide, he reached an island where people did not have cats. There were a lot of mice and rats on that island. They were a menace to the people as they used to eat their grains,bite through their clothes and destroy other items.

They would bite babies in their sleep and spread diseases as well. Tikku told them that his cat was very efficient in killing rats. He left the cat in one house for some time and soon the cat killed all the mice and rats in that house. The people were very impressed and wanted to buy the cat. They asked Tikku how much it would cost. Tikku replied,“As much gold as an elephant can carry.” They immediately agreed and gave the gold to Tikku. So, Tikku sold the cat, took the gold and returned home.

In this way, because of his sons’ cleverness, the old farmer became very rich.