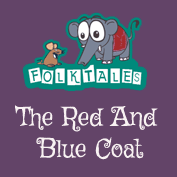 Once, there were two boys who were the best of friends. They wanted to stay as best friends forever and were determined not to let anything spoil their friendship. They grew up together and later, married and had their own families. They even built houses that faced each other. There was also a narrow path that they created which acted as a border separating their farms.

One day, a man from their village thought of playing a trick on them. He found a double colored coat from a local tailor and dressed himself in that. The coat was blue on one side and red on the other.

The next day, the man wore the coat and started walking along the small path between the houses of the two friends. He made some loud noises so that he could catch the attention of both the boys who were working on their respective farms.

In the evening, when the friends sat down for tea, they had a little chat among themselves. “Wasn’t that red coat that the man was wearing in the morning, lovely?” the first friend asked.
“It was a blue coat, not a red one,” the other friend said confidently.

“I saw him from very close and he was wearing a lovely red coat,” the first one said.

“No you are wrong. It was a blue coat,” the second one replied.

“You are mistaken. It was a red coat,” the first friend insisted.

This argument continued for a while until it changed into a fight. The two men started insulting each other; they fell on the ground, hit each other and started screaming, “Our friendship is over now.”

Right then, the man who had played the trick on them was passing by. He took out the coat, which was the reason for the fight, and showed it to them. The boys realised that the coat was indeed blue from one side and red from the other.

“We have been friends for all our lives and you have spoilt our friendship. It is entirely your fault,” both the friends blamed the trickster.

“Please don’t blame me for all this,” the man said. “I am not the reason behind your fight. Both of you were right and wrong at the same time about the coat, as both of you saw it from your own point of view.”