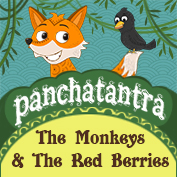 Once, a large troop of monkeys lived in a hilly area. When winter came, the monkeys had no place where they could take shelter. They had to face the cold wind and snowfall. It was getting unbearable for them. One monkey suggested that they should go and take shelter in the nearby village in the houses of the people who lived there. But next morning, when the village people saw such a huge troop of monkeys in their village, they drove them away by pelting them with stones and sticks. The monkeys were forced to return to the cold, hilly area.

The monkeys were shivering in the cold when suddenly one monkey had an idea. He suggested that they should make a fire and warm themselves the way they had seen the villagers do sitting around the fire. So, the monkeys collected some sticks. They came across some red berries growing on wild plants and mistook them for burning coals. They plucked the berries, put them under the pile of sticks and attempted to light the fire by blowing on the pile. But nothing happened. There was no fire. The monkeys were puzzled.

A bird who was watching all this from a tree said, “Oh you silly monkeys! You are such fools to try and start a fire with those red fruits. Have you ever seen fruits starting a fire? Why don’t you go and take shelter in that cave that is at the foothills?”

The monkeys were full of rage to see the little bird giving them advice that they had not asked for. An old monkey said to the bird, “How dare you call us fools? It is better that you go and see to your own business and don’t interfere in our affairs.”

But the little bird did not care. She kept chirping and giving unwanted advice to the monkeys. Then, filled with rage, one big monkey caught the bird in his hand and dashed her head against the trunk of the tree. The bird died immediately. This is why it is said that giving advice to idiots is useless; instead it could create more trouble.

Panchatantra: The Thief, The Giant And The Brahmin