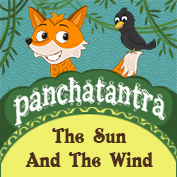 Once, the wind and the sun had a tiff between themselves as to who was stronger of the two. The wind claimed that he was stronger than the sun, whereas, the sun asserted that he was more powerful than the wind. None of them was ready to accept the supremacy of the other and thus, the discussion was not coming to an end. Finally, both of them consented to do something to prove their point.

Just then, they saw a man travelling down the road. The sun got a brilliant idea and said to the wind, “Let us test our strength on that man. Whosoever can force him to take off his jacket, shall be considered the winner.” The wind readily agreed and asked the sun to hide himself behind the clouds. The wind then, generated a cold breeze all around that place and started blowing harder. But, the harder the wind blew, the tighter the man held his coat against him. The wind blew until he was exhausted, but he could not remove the coat from the man’s back.

Now it was the sun’s turn. He came out of hiding and began to shine with all his might. The man started to feel the heat of the sun. Slowly, the sun grew hotter and hotter. Soon, the man began to perspire. He took off his jacket and headed for the nearest shady tree.

Thus, the sun proved himself to be stronger than the wind.