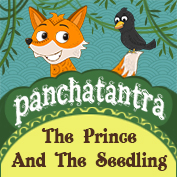 A long time ago, there was a king who reigned over a large empire. The king was very noble and kind but his son was rude, ill-mannered and bad-tempered. The king tried all kinds of ways to reform his son. The ministers, courtiers and other important and learned people of the kingdom also tried to make the prince change his ways but to no avail. They tried to make the prince realize that his bad behaviour could create a bad impression on the public, but the prince was never willing to listen to any well-meant advice.

One day, while the king was taking a walk in his palace garden, he saw a sage pass by. There was a radiant glow on the sage’s face and a confidence in his gait that made the king infer that the sage must be a very learned person full of divine knowledge. The king sent a messenger to invite the sage to his palace. The sage accepted the invitation and was welcomed warmly by the king. When the king found out that the sage was looking for a place to live in, he offered to make a hermitage in the palace for the sage. The sage accepted the king’s offer and started residing in the hermitage in the palace.

One day, while the king was talking to the sage, he said, “Dear Sir, it must have come to your knowledge by now that I have a son on whose account I am constantly worried. He is very ill-mannered and bad-tempered. The public of my kingdom considers him unworthy of being a prince. I’m afraid they won’t accept him as their king after me. Please help me, Sir. You are wise; you can find some way of teaching my son to mend his ways.” The sage assured the king that he would do something to set things right.

Next day, the sage asked the prince to come for a walk with him in the palace garden. There, he pointed towards a little plant and said, “Eat a leaf of this plant and tell me how the taste is.” The prince plucked a leaf of the plant and put it in his mouth. As soon as he tasted it, he spat it out on the ground in disgust. “It’s bitter! It must be some poisonous seedling. It could prove to be dangerous to the health of many people if it grows. So, it should not be allowed to grow into a big tree.” Saying this, the prince pulled the plant out of the ground and tore it up.

The sage picked up the plant that the prince had destroyed and said, “The way that you reacted towards this plant today, one day the people of your kingdom may react towards you in the same way. They think that you are a wicked prince, so they may not allow you to become their king and may exile you. It is for your own good that you must mend your ways and try to develop a sense of sympathy, compassion and kind-heartedness towards all your fellow beings.”

The prince learnt his lesson. He understood the message that the sage was trying to convey to him through the example of the plant. From that day forth, the prince tried to change his rude and ill-mannered behaviour and became humble and kind. The king was very pleased to see a change in his son and expressed his gratitude to the sage.