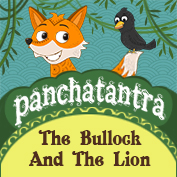 Once, a village merchant named Vardhmanaka was going to Mathura on his bullock cart. His two bullocks, Sanjeevaka and Nandaka, who had always served him faithfully, were pulling the cart.

As they were walking along the bank of river the Yamuna, Sanjeevaka all of a sudden stepped into a marshy area and got stuck. He tried to get out of the marsh with all his strength. The merchant also tried to get Sanjeevaka out of the marsh, but nothing worked. Ultimately, Vardhmanaka was left with no choice but to leave Sanjeevaka there and go on with his journey.
So, Sanjeevaka was left there, stuck in the marsh. He thought sadly, “I served my master faithfully throughout my life and this is how he has treated me.”

Now, there were only two options for Sanjeevaka—either to try with all his might to escape from the marsh or to give up and die there. He thought, “It is said that God helps those who help themselves. I will not give up. I will try my best to get out of this marsh.” So, Sanjeevake used every bit of his strength and energy to struggle against the marsh that was pulling him down, and finally he managed to get out of it.

Now, Sanjeevaka had nowhere to go. He did not want to return to his master’s house after his master had deserted him so heartlessly. So, he started walking along the banks of the river. He wandered about, eating fresh grass in the nearby forest and drinking water from the river. Soon, living in the natural environment, he regained his strength and became healthier than ever. He started bellowing like a lion. His bellows sounded like thunder and could be heard from miles away.

One day, the king lion of the forest, Pingalaka, went to the river to drink water. There, he heard the thunder-like bellowing which scared him so much that he ran back to his cave at once. His ministers were two jackals, Damnaka and Kartaka. When Damnaka saw that the king seemed to be afraid of something, he went and asked the king about it. “What is the matter, my lord? Has something scared you?” he asked. “Tell me, and I will bring it in front of you at once.”

Though the lion, being the king, did not want to admit his fears, he ultimately told Damnaka about the frightening thunder-like sound. Damnaka at once left to investigate the source of the sound. Soon, Damnaka brought Sanjeevaka to the court and said, “This is the animal who has been making those frightful sounds, My Lord. He says that Lord Shiva has sent him to roam around in our forest.”

King Pingalaka was pleased to meet Sanjeevaka. Soon, they became friends and spent most of their time chatting with each other.
Gradually, the lion started becoming more and more spiritual. He started neglecting his kingdom and even stopped hunting for his prey. This made Damnaka, Kartaka and his other subjects very worried.

Then, Damnaka came up with a plan. He went up to the king and said, “My lord, Sanjeevaka has evil plans about your kingdom. He plans to kill you, take over your kingdom and become the king himself.”

And the next day, he went to Sanjeevaka and said, “King lion is no true friend of yours. He has planned to kill you and distribute your flesh to the whole kingdom. You should kill him with your sharp horns before he kills you.”

Sanjeevaka was very furious on hearing this. He went to the king’s court and started bellowing in a thundering tone. The lion, who had already been misinformed by Damaka as to Sanjeevaka’s intentions, was himself very furious. Like a flash, the lion pounced on Sanjeevaka with a loud roar.

The moral of the story is that one should never befriend a natural enemy.

Panchatantra: Three Fishes And The Fishermen

Panchatantra: The Crow And The Water Pitcher