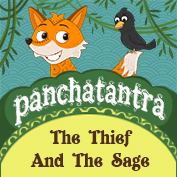 Once upon a time, a sage used to live in a cottage. He was a very learned man. Many people were his followers and used to come to listen to his spiritual teachings. They also used to consult him on important matters. As offerings they gave him money and valuables. In this way, soon the sage had amassed considerable wealth. This wealth, instead of making him happy, was a great source of worry for the sage. He had to constantly guard his wealth. He put all of it in a bag and carried it under his armpit. He never parted with this bag.

Now, a thief named Ashadhbhuti came to know about the sage’s wealth. He made a plan to steal it. He went to the sage’s cottage and said, “Guruji, Please accept me as your disciple. I have had enough of worldly and materialistic affairs. I want to learn more about spirituality. Only you can show me the way to attain moksha.”

The sage was pleased with Ashadhbhuti’s words and accepted him as his disciple after performing certain rituals. Ashadhbhuti pretended to be the perfect disciple. He lavished all his attention on his guru to win his approval and trust. He pressed the sage’s hands and feet and waited upon him. But many days passed and Ashadhbhuti could not find a single opportunity of getting to the sage’s wealth. The bag was always under the sage’s armpit and he never took it off. It seemed as if the sage did not trust Ashadhbhuti completely. He also never allowed Ashadhbhuti to enter his cottage at night. Ashadhbhuti was disappointed but he did not give up.

Once, a disciple of the sage invited the sage to his house to perform a religious ceremony. The sage decided to take Ashadhbhuti along with him. Both of them set off on their journey. On their way, there was a holy river where the sage wanted to bathe. The sage wrapped his money bag in his robe and put it on the river bank, saying to Ashadhbhuti, “Take very good care of this bag while I take a bath.”

When the sage returned to the bank after bathing, Ashadhbhuti was nowhere to be seen. The sage’s robe was lying on the ground. He picked it up quickly and saw that the bag of money that he had wrapped in the robe was gone too. “He has robbed me!” the sage cried in dismay and fainted. On regaining consciousness, he returned to his cottage unhappily.
It is rightly said that wealth may sometimes become a source of all troubles.

Panchatantra: The Shepherd And The Wolf

Panchatantra: Three Fishes And The Fishermen