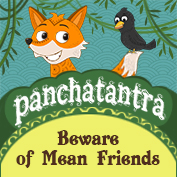 Once upon a time, a lion called Madotkata used to live in a dense forest. He was the king of the forest. He had three friends—a jackal, a wolf and a crow. These were not true friends. They were selfish and had become friends with the lion for their own benefit because he was the king.

One day, a camel lost his way and wandered into the forest. The three friends of the lion saw the camel and realised that he did not belong to this forest, so he must have lost his way and reached there.

“Let’s kill and eat him,” the jackal said to his friend. “No,” the wolf replied. “It is a large animal. Let us go and inform our king.” The crow said, “Yes, this is a good idea. Then he can kill the camel and we can all share the meat after the lion has had his share.”

So, the three went to the lion and said, “Your Majesty, a camel has wandered into our kingdom from somewhere. He has a lot of flesh and may prove to be the best meal of our lives. Let’s kill him and eat him.” The lion was angered on listening to the three friends’ suggestion. “If the camel has come to our kingdom seeking refuge, it is my duty as the king to offer him protection, not to kill him and eat him. Go and bring him to me.”

The three friends were very disheartened but they could not do anything contrary to the king’s wishes. They went to the camel and told him about the lion’s command. The camel was very scared on hearing this. He thought that his last moments had come. He resigned himself to fate and followed the three animals to the lion’s den. But he was surprised on reaching there, because the lion received him warmly. The lion also assured the camel of safety while he was living in his kingdom. The camel was very happy. He started living with the jackal, wolf and crow.

A few days later, while the lion and his friends were hunting for food, they got into a fight with a wild elephant. The fight got so fearsome that all three of the lion’s friends deserted him and fled. Though the lion managed to kill the elephant, he was badly injured in the fight. He was unable to hunt and had to go hungry for many days. His strength was failing. His friends were also starving because they depended wholly on the lion’s prey for their food. But the camel, being a vegetarian, was not affected. He grazed around happily as before.

One day, the jackal, the wolf and the crow went up to the lion and said, “Your Majesty, you are becoming weaker day by day. Why don’t you kill the camel and eat him?”

The lion replied fiercely, “No, he is our guest. We can’t treat him that way. Don’t even suggest that to me.”

So, the three animals thought of another plan. They went to the camel and said, “Friend, our king is in a very unfortunate situation. He has had nothing to eat for many days and is unable to hunt for food. Under such circumstances, it is our duty to sacrifice ourselves to save our king’s life. Let us go to the king and offer him our bodies for his food.”
The camel had no idea about the other three’s scheme and agreed to come along with them. All four reached the den of the lion. First, the crow came forward and said, “Your Majesty, we could not find any prey, so you can eat me.” The jackal said, “Your body is too small to assuage the king’s hunger. Your Majesty, I offer myself to you. Kill me and eat me.”
The wolf said, “No, you are also too small to assuage our king’s hunger. I offer myself to you for this noble cause, My Lord. Kill me and eat me.”

But the lion did not kill any of the three animals. The camel was standing there looking at what was going on. He thought that now it was his turn to go forward and make his offering. So, he said, “My Lord, a friend in need is a friend indeed. Please eat me and assauge your hunger.”

The lion had already been informed by the wolf that the camel was very keen on offering himself to the king. Now that the camel himself offered to sacrifice himself, the lion did not feel any pangs of conscience on killing the camel. So, he pounced on the camel at once and tore him to pieces. The lion and his friends fed on the camel for days.

That is why it is said that one should be beware of people who become friends only to fulfil their evil desires. They might appear to be sweet, but they are never trustworthy in reality.

Panchatantra: How Monkeys Got Their Red Bottoms

Panchatantra: The Mice and The Elephants