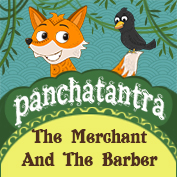 Once, in the town of Patliputra, there lived a merchant named Manibhadra. He was a rich and charitable man. But once, misfortune struck him and he lost all his wealth. He became poor and his social status also diminished. He became very depressed.

One night, he was lying in bed feeling depressed and cursing his fate. He also thought of committing suicide by starving himself. But soon, he fell asleep. In his dream, he saw a Jain monk appear before him and speak to him. The monk said, “You have no cause to worry. I am wealth. I was gathered by your forefathers and you have a legitimate right to possess me. I will come to your house in the form of a Jain monk tomorrow. Hit me on my head with a stick and I will turn into pure, solid gold.”

When the merchant woke up the next morning, he could hardly believe his dream. That day, the merchant’s wife had called the barber to the house to massage her feet. While the barber was there, a Jain monk appeared at the door of the merchant’s house. The merchant remembered his dream and welcomed the monk inside. After having the monk seated and offering him water, the merchant hit the monk on his head with a stick. Immediately, the body of the monk turned into gold. The merchant was very happy. He collected all the gold and kept it in his safe.
The barber who had witnessed this scene was astonished. He thought to himself, “I should also invite some monks to my house. When they come inside, I will hit them on their heads and they will turn into gold. Soon I will be the richest man in the town.”

So, the barber went to a monastery and invited the head monk to dinner at his house. But the head monk refused saying, “We are not Brahmins that you are inviting us for food. We collect alms. We do not live to eat, but we eat only for survival.” The barber then went outside the monastery and when he saw some monks coming towards him, he requested them to come and conduct prayers at his house.

Some of the monks agreed and the next day, they went to the barber’s house. As soon as they entered the house, the barber hit all of them on their heads with a heavy stick. Some of the monks died on the spot while some got seriously injured. Soon, as talk of this incident spread around the town, the barber was arrested for his crime and was made to appear before the court of law.

In the court, the judge asked the barber for an explanation of why he had committed this crime.

“I saw the merchant doing it,” the barber replied.

So, the merchant too was summoned to the court. He told the judge the whole story about his dream and the monk turning into gold.

The judge ordered a death sentence for the barber for having killed and injured many people.

It is true that blind imitation is always dangerous.