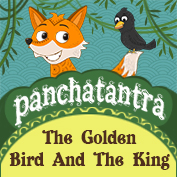 Once upon a time, a magical bird who used to live in a forest. This bird laid golden eggs. One day, a fowler who was hunting for birds in the forest, came near the magical bird’s nest and saw the bird laying golden eggs. He could not believe his eyes. Immediately, he caught the bird in his nest.

On returning home, he thought about this matter a great deal. He realised that it would be dangerous for him to keep the bird with him. He would become immensely rich in no time with the help of the eggs that the bird would lay. And this sudden, unaccountable wealth might lead the king to believe that he was earning money by dishonest means and the king might imprison him. Thus, he thought that keeping the bird will land him into trouble and it would be better to present the bird to the king.

So, the fowler told the king all about the magical bird and presented it to him. The king was extremely happy to have such an extraordinary bird in his possession. He ordered his servants to take proper care of the bird.”

The bird flew away and thought to itself, “This kingdom seems to be full of fools. The fowler, who knew for a fact that I laid golden eggs, did not keep me for himself but gifted me to the king. The king ordered for me to be released. Even the king’s attendants did not believe in my magical abilities. But I was the biggest fool of them all to have landed in the fowler’s net in the first place.”

The moral of this story is that we should take a decision only after verifying the facts.