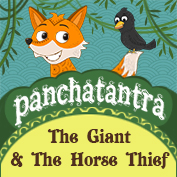 Once, there was a king who had a beautiful daughter. In the forest next to the kingdom, there lived a giant. This giant was in love with the princess. But he could never come close to the princess as she always wore an amulet that kept all evil away from her. Nevertheless, the giant would frequently appear before her and embarrass her. The princess was fed up with this.

One day, the giant was hiding behind the curtains of the princess’s room when he heard the princess talking to her friends. She was saying, “A very powerful giant keeps pestering me. Please suggest some way of getting rid of him.” On hearing about a ‘powerful giant’, the giant thought that this must be some other giant, more powerful than him. He wanted to know whoo this other giant was so that he could kill him. To find out more about the powerful giant, he transformed himself into a horse and started living in the palace stables with the other horses.

One night, a thief entered the stable with the mind to steal a horse. He looked at all the horses and thought that the ‘giant horse’ was the finest. So, he mounted him and started running away.
The giant, however, thought that this man must be the other ‘powerful giant’. He got scared and started running wildly. The thief whipped him and he ran even faster in fear. When the thief pulled the reins to stop he horse, the giant did not stop. He was so scared that he kept on running. Finally, in an attempt to get off the horse’s back, the thief caught hold of a Banyan tree’s branch above and clung on to it while the ‘giant horse’ just kept running ahead.

On this Banyan tree, there lived a monkey who was the giant’s friend. He figured out that the giant must have mistaken the thief for a more powerful giant and called out to him, saying, “This is just a human being. Why are you afraid of him?” Now, things became clear to the giant and he headed back towards the thief to kill him and eat him. Just then, the thief who was hanging from the branch, saw that the monkey’s tail was dangling quite close to his face. He bit it hard and the monkey screamed out in pain.

This again convinced the giant that the thief was no ordinary human but a very powerful giant who would kill him. So, he ran away into the forest as fast as he could.

Panchatantra: The Jackal And The Drum

Panchatantra: How Monkeys Got Their Red Bottoms