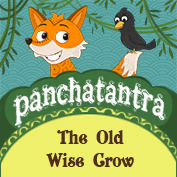 Once, there was a huge banyan tree on which thousands of crows lived. Close to this banyan tree, there was a cave in which thousands of owls had made their home. The owls used to hunt the crows at night. Every day, many crows were killed by the owls. The main reason for this was that the crows could not see clearly at night while the owls, being nocturnal birds, could see very clearly and locate exactly where the crows were sitting. The poor crows could not fly away to safety in time and became easy prey for the owls.

Soon, the population of crows became considerably less. The king of crows was very troubled by this routine happening. He called a meeting to come up with a solution to this problem. After a lot of discussion, finally the crows hit upon a clever idea. They chalked out the details of their plan and decided to put it into action the next day.

As per the plan, the next day, a drama was staged near the cave of the owls. The king of the crows pretended to beat up an old crow. They sprinkled a goat’s blood on the old crow to make it seem as if he was injured and bleeding. Then they left him lying there in a seemingly pitiable condition.

The owl king’s senior minister advised the owl king to admit the wounded crow in their kingdom. He said, “Your Majesty, this poor crow has come to be in this miserable condition because he spoke favourably about us to his king. He said that owls were a superior race and stronger and more intelligent than them and so owls should be recognized as the king of birds. This led to him being beaten.”

The owl king said, “Let him in and help him to regain his health and heal his injuries.”
So, the old crow was carried into the cave by the owl king’s soldiers. Soon, the old crow made a favourable place for himself among the owls. Most of the ministers of the owl king’s court were in the old crow’s favour. There were only one or two who opposed him saying that, after all, a crow is an enemy. But the opposition was quite weak and the crow continued living with the owls.

One day, he found his opportunity and began to put his plan into action. It was day time, so the owls were unable to see anything because of the sunlight. The apparently injured crow got up and gradually made a pile of a thousand wooden logs at the mouth of the owls’ cave. Then, he set fire to the logs. The flames leapt high and soon the whole cave including all the owls inside it were burnt down to ashes.

It is true that one must never trust an enemy and allow him into one’s home.