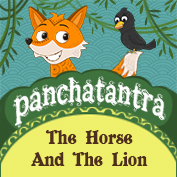 Once upon a time, there was a farmer who owned an old horse. As the horse had become old, the farmer told the horse to leave his house and live in some forest. The horse was disheartened to hear his master’s harsh words. He said, “Master, I spent my young age in serving you. I was extremely loyal and sincere towards you. Never even once did I fail in carrying out my duties. You showered your love and affection on me as long as I was young and now that that I have become old; you are turning me out of the house. Do you think I really deserve to be treated like this?”

The farmer was in a dilemma as to what to say to the horse. He did not want to bear the horse’s burden and at the same time he did not want to take the blame of turning out the horse on his shoulders. He thought for a while and said, “All right!” I will allow you to stay in my house if you bring me a lion’s skin.”

The horse understood that his master did not want him to come back and that is why he had put forward an almost impossible condition in front of him. With a heavy heart, he left for the forest. A fox spotted the horse in the forest and inquired about his sadness. The poor horse narrated the whole story.

The kind hearted fox offered to help the horse. He instructed the horse to lie down on the ground and pretend to be dead. The fox then, went to meet the lion who ruled over that part of the forest. The fox greeted the lion and said, “Your Majesty, there is a dead horse lying unclaimed in your kingdom. I request you to come and see for yourself.”

The lion readily consented to accompany the fox. When the fox and the lion reached the spot where the horse was lying pretending to be dead, the fox said, “Let us pull this horse and put it behind the bushes so that we could have a peaceful meal. If we eat it out here in the open, some other animal may come and ask for his share. If you permit, I will tie your tail to the tail of this dead horse. This way, it would be easier for you to carry this heavy animal.”

“Yes, I think you are right,” said the lion and asked the fox to do the needful. Instead of the lion’s tail, the clever fox tied the lion’s leg to the tail of the horse and then instructed the horse to start running as fast as he could.

All this happened so suddenly, that the lion didn’t get a chance to balance himself. The horse was running like wind, dragging the lion over the stones, thorns and bushes. The lion began to cry and shout loudly, but the horse didn’t stop. At last, the lion succumbed to his injuries and died.

The horse stopped at his master’s house with the dead lion tied to its tail. The farmer was very surprised that the horse had accomplished an impossible feat just to live with him. He promised to take care of the horse till the time he lived. The horse was deeply indebted to the clever fox.