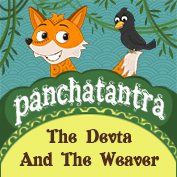 Once upon a time, a weaver called Mantharaka lived in a small town near the forest. One day,while he was working on his handloom, the wood of his loom snapped. He decided to go to the forest and bring some wood to repair his loom. So, he took a sharp axe and set off towards the forest.

In the forest, the weaver came across a strong and healthy Shinvashapa tree.The weaver thought that the wood of this tree will be sturdy and decided to cut it and use it for his loom. The weaver raised his axe and was just about to bring it down on the tree when he heard a voice speaking from inside the tree, “Stop! Please leave this tree. It is my home. Please don’t cut it.”

The weaver replied impatiently, “So what? Go and find another tree to live in. I have to repair my loom. Otherwise how will I weave cloth and sell it to feed my family?”

The voice spoke again, “If you spare this tree, I will grant you a wish. Ask for whatever you want.”

The weaver considered the offer. Then he said, “Alright. But I want to consult my wife and my friends. I will come later and ask for my wish.”

“Fine,” the voice replied.
The weaver returned to the town. There he met the barber who was his close friend. He told the whole story to the barber. The barber said, “That is splendid, my friend.I think it would be wise to ask for a whole kingdom. Once, that is granted to you, you can become the king of the kingdom and you will have all kinds of riches and luxuries. And then maybe you could think of making me your prime minister.” The barber’s thoughts flowed on along that line.

The weaver said, “That’s an idea. But let me consult my wife too.”
So, the weaver went to his wife and told her all about the tree and also about the barber’s advice. His wife was pleased to know about the tree but she did not like the barber’s idea. She said, “That is a silly wish to ask for. Everyone knows that kingdoms are such sources of trouble. You will be surrounded with worries—looking after your people,fighting battles,etc.It is better that you ask for something that can benefit us. Why don’t you ask for two more arms and one more head? That way you will be able to weave more cloth and sell more cloth in the market and thereby earn more money.”

The weaver liked the idea and went to the tree. He expressed his wish for another pair of arms and one more head. The wish was immediately granted. The weaver grew one more head and one more pair of arms. He was full of excitement and joy and started walking back towards the town. But when the people of the town saw him, they thought that he was some kind of a monster.They were afraid of him and pelted him with stones and sticks until he died.

The barber heard about this incident and was deeply grieved for the fate of his friend. This is why it is said that one should never follow an advice blindly.