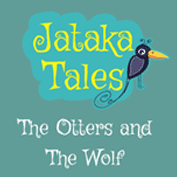 Another great story from Jataka Tales. One day a she-wolf had a craving to eat fresh fish-meat. The wolf did not know how to swim, but still he went down to the river, hoping to get some fish-meat for his mate.

When the wolf reached the river, he saw two otters standing on the bank, also looking for fish. Soon one of the otters spotted a big fish in the water. He swiftly jumped into the river and caught the fish by its head. But the fish was very strong and was struggling continuously to get out of the otter’s hold. Fearing that he might lose the fish, he called out to his friend for help. The other otter also jumped into the river and held the fish tightly from the tail. Together, they were able to bring the fish to land.

The first otter said, “This fish is good enough for both of us! Let us divide the fish into two parts.”
“I want the half with the head on,” said one.
“You cannot have that half. That is mine,” said the other. “You can take the tail.”

The wolf heard the otters arguing over the division of fish and a brilliant idea struck him. He went up to the otters and offered his help to settle the dispute. There was no other way of ending the quarrel, so the otters also readily agreed. The wolf cut off the head and gave it to the first otter as he had caught the fish by the head. Then he severed the tail of the fish and gave it to the second otter as he had caught the fish by the tail. Both the otters were anxiously waiting to find out that how the wolf would divide the rest of the fish, just then, quick as the lightening, the cunning wolf quickly ran away with the body of the fish.

The otters realized that they had been fooled by the wolf. They were full of remorse and said, “If only we had not been greedy and fought with each other, we could have enjoyed a scrumptious meal.”

The wolf was very pleased with himself on fooling the two otters and happily went home with the fish-meat.

Jataka Tales: The Tricky Wolf and The Rats

Jataka Tales: The Elephant And The Dog