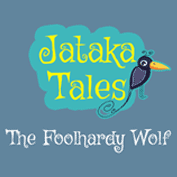 Another great story from Jataka Tales. One day a lion was resting outside his cave, when a wolf happened to come there. The wolf thought that it would be a nice idea to offer his services to the lion and get some food to eat in return. He approached the lion and threw himself at the lion’s feet. He begged the lion to let him be his servant and give him just a small share from his kill in return.

The lion agreed and instructed the wolf, “Each day you must climb the top of the hill near my cave and as soon as you see any animal coming this side, you must say at the top of your voice, “Great lion, come forward in all thy might. Your prey is in sight!” On hearing your call, I will come and kill the animal. I will first eat it myself and then give a small portion of the meat to you as well.”

From that day onwards, the wolf started looking out for possible prey for the lion while standing on the nearby hill top. Whenever the lion heard the wolf’s call, he used to go and kill the beast and then give a small share of its meat to the wolf also.

Courtesy the lion, the wolf was having a good time feasting on fine meat. As days went past, the wolf grew bigger and stronger and started feeling proud of his great size and strength. He became so overconfident that he started thinking of killing an elephant on his own.

So, one day the wolf went to the lion, and said, “Great lion, I think I have also become very strong and powerful being in your company. I wish to switch places with you for one day and make a kill on my own. I intend to kill an elephant, so would you please go to the top of the hill to look out for an elephant? Then when you see one coming this side, say, “Great wolf, come forward in all thy might. Your prey is in sight.”

The lion was amused at the foolish wolf’s bold idea. As a good master, he tried to advise him, “O Wolf, the elephants can only be killed by lions. Your plan is very ambitious and you may get killed while trying to kill the elephant.” The lion tried his best to drill sense in the wolf but, he did not listen. Finally, the lion consented to do as the wolf said. He climbed up the hill and when he saw an elephant coming towards the den, he cried out loud, “Great wolf, come forward in all thy might. Your prey is in sight.”

Out came the wolf, running as fast as he could and jumped upon the back of the elephant to dig his teeth in its neck. But, he missed his aim, and fell down at the elephant’s feet. The elephant raised his right foot and killed the wolf.

Seeing all this, the lion said, “O Foolish wolf! You will no more come forth in your might. May your soul rest in peace.”

Jataka Tales: The Princes And The Water Sprite