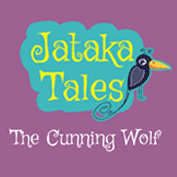 Another great story from Jataka Tales. Once upon a time some men, who lived in the city, decided to have a picnic in the woods. They carried baskets full of delicious eatables with themselves. All the dishes were so tasty that they finished off everything much before supper time.

One of the men volunteered to go alone inside the forest and get some fresh meat. He took a big club and went deep into the woods. He halted near a lake and thought of a clever plan to catch the animals. He lay down on the ground near the lake, clenching the club firmly in hand and pretended to be dead.

After some time, a pack of wolves came there to drink water. The king of wolves was very clever. He saw the man lying on the ground and suspected that there was something wrong. He said, “I am certain that this man is trying to trick us into some trap. All of you stay here while I will go and find out whether he is really dead, or just pretending to be dead.”

Then the king of wolves stealthily crept near the man and softly pulled the club with his teeth. At once, the man pulled back his club. The king of the wolves fled saying, “If you had been dead, you would not have pulled back your club when I tried to pull it away. You were actually planning to kill one of us for your supper.”

The man got furious on getting outsmarted by a wolf. He jumped up and threw his club at the king of the wolves. But he missed his aim. He looked for the other animals but they had all run away on hearing the commotion.

Then the man went back to his friends with a long face and told them the story about how his clever trick was foiled by an even cleverer wolf. That day the men could not find anything else to eat and had to return to their homes hungry.

Jataka Tales: The Elephant And The Dog