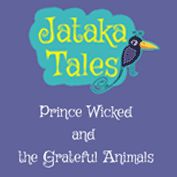 Another great story from Jataka Tales. Once upon a time a king had a son named Prince Wicked. He was very cruel and used to hurt everyone by his actions and words. Nobody in the kingdom liked him and feared the day he would take over the reins of the kingdom.

One day, when the prince was swimming in the river, suddenly a fierce storm rose in the sky. It started raining heavily and a flash flood came in the river. A big wave came out of nowhere and took away the prince with it. The servants saw the prince getting washed away into the river, but deliberately did not do anything to save him. They thought that it was better for all of them to let such a diabolical prince die. They went to the king and told him that the prince went missing somewhere in the storm.

In the meanwhile, Prince Wicked was trying to save himself from drowning in the flood water. Luckily, he came across a wooden log and climbed upon it. The prince, along with the log started floating farther down the river.

Because of the flood, some water had also rushed into the homes of a rat and a snake who lived near the river bank. In order to save their lives, the rat and the snake caught hold of the wooden log on which the prince was lying. The storm had also destroyed a tree on which a young parrot lived. The young parrot was thrown into the river with a strong gust of wind. He was unable to fly because of his tender and wet wings. When he saw the wooden log, he also perched himself on it. Now there were four of them on the log, floating down the river together.

Just around the bend in the river, a certain poor man lived. He heard the cries of the prince and jumped into the river to save him. With much effort, he was able to drag the wooden log to the shore. Now the prince and the animals were safe.

He built a fire to keep them warm and also gave them some hot milk to drink. The poor man, however, first attended to the animals as they were weaker and needed instant care. This made the young prince angry, and he said to himself, “Instead of taking care of a prince, this man is looking after these worthless animals.” This made the prince turn against the poor man.

A few days later, the storm subsided and everybody decided to go back to their homes. First of all, the snake bid farewell to the poor man saying, “Father, you have been very kind to me! I know a place where there is abundant gold hidden. Whenever you need it just come to my home and call out, “Snake!” and I will show you that place.”

The rat also knew about some hidden money. He bid adieu to the poor man and said, “If ever you want money, come to my home and call out, “Rat!” and I will take you to a place where a lot of money is hidden.”

Then the parrot came, saying, “Father, I do not know of any treasure. But if you ever wish to eat the best quality of rice, then come to the place where I live and call me out. Together with my family, I will gather the choicest of rice grains from the fields for you.”

Now it was the prince’s turn to take the poor man’s leave. He was not at all grateful to the poor man for saving his life but he had heard all the animals conveying their words of gratitude, so he also pretended to be as thankful and said, “Come to me when I become the king, and I will give you great riches.” So saying, he returned to his kingdom.

Some time after this incident, the poor man decided to visit all those whom he had saved and to find out whether they were still true to their words or not. First of all, he went to the snake, and standing near his hole, called out, “Snake!” At once the snake came out and said, “Father, I am so happy to see you. You may take all the gold that is buried here.” The poor man was happy to know that the snake was willing to keep his promise. He said, “When I need it, I will come and collect it.”

Then, the poor man went to meet the rat. The rat was also very happy to see the poor man and wanted to take him to the place where the money was hidden. The poor man said, “When I need the money, I will come back to you.”

Going next to the parrot, he called out, “Parrot!” The bird flew down from its nest as soon as he heard the call. He welcomed the poor man and asked if he wanted the fresh rice grains from the fields. The poor man thanked the parrot and promised to avail the parrot’s offer some other time.

Lastly, the poor man went to visit the price, who had now become the king. When the king saw the poor man, he was filled with hatred. Instead of rewarding him, the king thought of punishing the poor man for insulting him. So, the king ordered his men to arrest him and march him up on the streets. He instructed them to beat the poor man at every corner of the street and then finally chop off his head.

The king’s soldiers reluctantly carried out his orders. While they were marching him on the street, the poor man cried over and over again, “It is better to save poor, weak animals than to save a prince.”

He also invited his friends, the snake, the rat and the parrot to live with him. The animals kindly consented and also brought the gifts that they had promised him. The king got a tube of gold made for the snake to live in, a glass box for the rat and a cage of gold for the parrot. All the animals lived happily ever after with the king.

For other interesting stories for kids, go to : Stories for Kids.