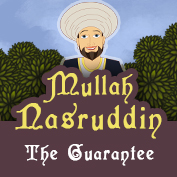 One day, Nasruddin was at the king’s court when the king turned to him and said, “Mulla Nasruddin, you are always boasting about your wisdom and cleverness. So tell me, can you teach your donkey how to read?”

Nasruddin replied, “Of course! That’s quite an easy task.”

“I don’t believe you,” said the king.

“I mean it and I can prove it to you,” said Nasruddin.

The king said, “Would you take it on as a challenge, then?”

“Absolutely,” replied Nasruddin. “If you give me fifty thousand dollars right now, I guarantee that by the end of eight years, I will have taught my donkey how to read.”

The king said, “Fine, I agree. But my condition is that if the donkey is unable to read by then, I will have you put in prison where you will be tortured every day.”

Both of them agreed to this deal and Nasruddin left for home.

The next day, Nasruddin told his friend about what had happened at the king’s court. His friend said, “Nasruddin, how could you ever agree to such an impossible task? You cannot even control your donkey enough to make it stand still, and now you have guaranteed that in eight years you would have taught him how to read? There is no way you can escape that prison sentence.”

“Relax,” replied Nasruddin calmly. “Eight years is a long time, my friend! By then, our king will probably be dead or he will not be in power anymore. And even if he is still the king at the end of eight years, chances are that my donkey would be dead by then. Worse come to worse, if by the end of seven years, both the king and my donkey are alive, I will still have one whole year to devise a plan to escape punishment.

For other interesting stories for kids, go to: Stories for Kids.

Mulla Nasruddin and the People’s Judgement

Mullah Nasruddin and The Guest of Honour

Mullah Nasruddin: Are you asleep?

Mullah Nasruddin: Milk for the Maula

Mullah Nasruddin: The man on the tree

Mullah Nasruddin: What clever people do?

Mulla Nasruddin and The Soup of the Soup

Mullah Nasruddin and the Trial