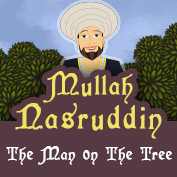 Mullah Nasruddin: The man on the tree

One day, a man climbed up a tree. While climbing up, he did not realise how tall the tree actually was and kept climbing up. On reaching the top, when the man looked down, he realised that climbing down from the tree would not be as easy as climbing up. He could not think of any way of getting down without injuring himself seriously.

He asked the people who were passing by to help him. But nobody could think of a way of bringing him down safely. Soon, quite a few people gathered around the tree and tried to help the man, but no one knew what to do. The man remained stuck on top of the tree.

Just then, Nasruddin, who was walking by, saw this scene and wondered what was going on. The people standing around the tree told Nasruddin about the situation. “Oh!” Nasruddin said, “I’ll get him down in no time.” He took a long rope and threw one end of it up to the man telling him to tie the rope around his waist.

Everyone wondered what Nasruddin’s plan was. When one of them asked him, Nasruddin replied, “Just leave it to me. It’s a foolproof plan.”

When the man on the tree had tied the rope tightly around his waist, Nasruddin pulled the rope with all his force. As soon as Nasruddin did this, the man fell down from the tree and hurt himself badly. The bystanders were shocked at this. They turned to Nasruddin and asked, “What were you thinking? What kind of a silly plan was that?”

Nasruddin replied, “Well, once I did exactly the same thing and saved someone’s life.”

One man asked him, “Is that true?”

“Absolutely!” replied Nasruddin, “The only thing I cannot remember is whether I saved him from a tree or from a well.”

For other interesting stories for kids, go to: Stories for Kids.

Mullah Nasruddin: Are you asleep?

Mullah Nasruddin: What clever people do?

Mulla Nasruddin and The Soup of the Soup

Mullah Nasruddin and The Guest of Honour

Mullah Nasruddin: Milk for the Maula

Mulla Nasruddin and the People’s Judgement

Mullah Nasruddin and the Trial