You Are Here : Home » Learn » New World » Answer me » Why do Pandas eat Bamboo?
DOWNLOAD 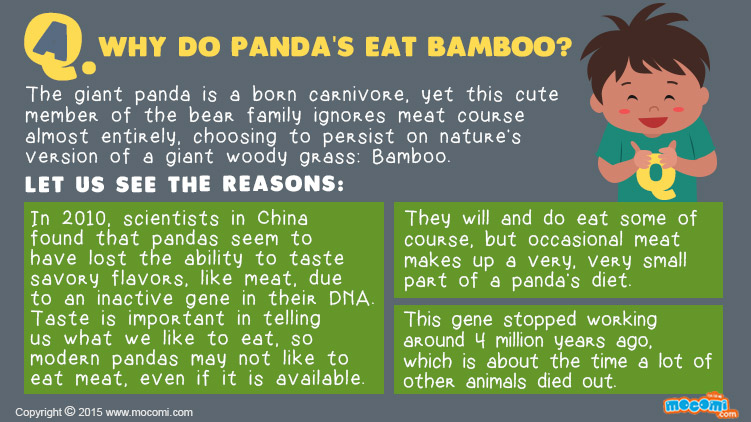 Why do Pandas eat Bamboo?

What do Pandas eat?

The giant panda is a born carnivore, yet this cute member of the bear family ignores meat course almost entirely, choosing to persist on nature’s version of a giant woody grass : Bamboo.

In 2010, scientists in China found that pandas seem to have lost the ability to taste savory flavors, like meat, due to an inactive gene in their DNA.

Taste is important in telling us what we like to eat, so modern pandas may not like to eat meat, even if it is available.

They will and do eat some of course, but occasional meat makes up a very, very small part of a panda’s diet. This gene stopped working around 4 million years ago, which is about the time a lot of other animals died out.

Why do Leaves fall off Trees?

Why can’t you tickle yourself?

Why don’t Spiders Stick to their Webs?

Why do we Blush?

Is there Life on Mars?