You Are Here : Home » Learn » New World » Answer me » Why do Songs get stuck inside the head? 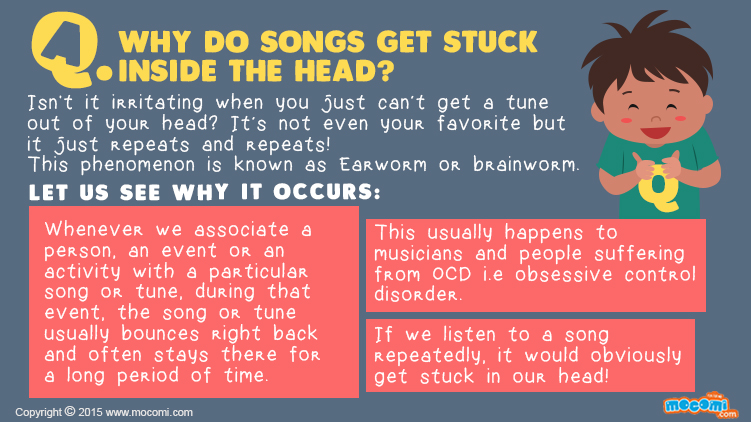 The Science of Earworms

You walk into a supermarket, and they’re playing a random song. Later, as you’re working around the house, or doing your homework, or taking a shower, you catch yourself humming it. It is not your favorite song but it repeats and repeats and repeats! Isn’t it super irritating when you just cannot get a particular song out of your head?

This phenomenon when a tune gets stuck inside your head and refuses to leave, is known as Earworm or brainworm.

There are many reasons that cause this effect in our brain.

This phenomenon is usually associated to musicians and people suffering from OCD that is obsessive control disorder.

If we listen to a song repetitively, it obviously gets stuck in our head

When we associate an activity, event or a person with a given song, during that event, the song usually bounces back and that too, to stay there for a long time.

If this has happened to you, don’t worry. Just find a way to keep your brain busy, or maybe listen to a different song.

Fun Fact: Women and people who are tired are more susceptible to earworm.

Why do we fall ill?

Why do we Lie?

How smart are Crows?