You Are Here : Home » Learn » New World » Answer me » Who owns Space?
DOWNLOAD 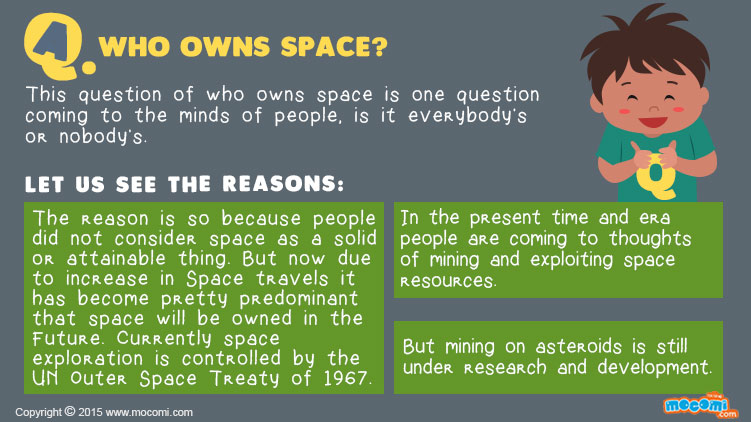 This question of who owns space is one question coming to the minds of people, is it everybody’s or nobody’s. This is coming to light now as multiple nations and private companies are capable of Space Exploration.

Let us see the Reason :

The reason is so because people did not consider space as a solid or attainable thing. But now due to increase in Space travels it has become pretty predominant that space will be owned in the Future.

Currently space exploration is controlled by the UN Outer Space Treaty of 1967. But in our technological era this Treaty is inadequate.

In the present time and era people are coming to thoughts of mining and exploiting space resources mostly asteroids which will now fall under the ASTEROIDS Act formed but US House of Congress Subcommittee on Science, Space and Technology. But mining on asteroids is still under research and development.

Also the boundary with Earth and Space is much closer than the Asteroid Belt. The Treaty also covers the satellites orbiting around the Earth and two of the principles state that countries are responsible for the damage caused by their satellites and they shall avoid any form off harmful contamination of Space and celestial bodies.

How does a Zipper Work?