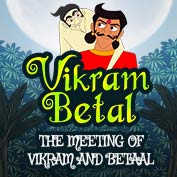 Vikram Betaal: The Meeting Of Vikram And Betaal

Once upon a time, there was a king named Vikramaditya who ruled over Ujjain, a prosperous city situated on the banks of the river Godavari. He was famous all over the world for his bravery, generosity and fair judgement.

One day, a sage presented himself in the king’s court and gifted a fruit to him. Since, that day, it became a daily routine for him to come and gift a fruit to the king. The king never felt the need of asking the sage as to why he brought a fruit to him daily. He just handed over all the fruits that he received from the sage to his treasurer who used to throw them in a storage room. One day, instead of giving the fruit to his treasurer, the king offered that fruit to a monkey who was sitting on a tree. When the monkey dug his teeth into the fruit, a sparkling diamond fell out of the fruit.

The king was extremely surprised, and asked his treasurer about the rest of the fruits. The treasurer took him to the store room and there when they crushed the rotten fruits, they found numerous precious diamonds hidden inside. The generous king decided to donate all the gems to the poor and needy.

Next day, when the sage came to offer him the fruit, the king asked the sage the reason behind his gifting him such priceless gems. The king also asked him what he wanted from him in return. On hearing this, the sage requested the help of the king in conducting a ritual that he was going to perform. The sage asked the king to meet him at nightfall on the fourteenth night of the dark moon near the cremation ground.

The sage was a sorcerer in reality. When the king reached the cremation ground, the sorcerer asked him to fetch a corpse, hanging from a tamarind tree in the nearby forest. The king agreed to bring the corpse from the forest, but when he tried to bring the corpse down, it flew back to the tree. The king did not take long to realise that the corpse was possessed by a ghost. The brave king did not get afraid, and was determined to fulfill his promise to the sage. He told the ghost about the promise that he had made to the sage and requested him to come along. Betaal consented to come with him on one condition- that the king would not speak a single word all throughout the journey. The king promised to be silent, but clever Betaal had some other plans for him. As soon as he attempted to get him down from the tree and put him on his shoulders,he started to narrate a story. And at the end of every story,he compelled the king to answer his question, thus breaking his silence.

Every time the king opened his mouth to say something, Betaal flew back to the tree. The king had to go back to the tree and start the ordeal of bringing him down all over again. This happened twenty four times. But the twenty fifth time, the king could not answer Betaal’s question. These twenty five stories are very famous in Indian literature, known as the Vikram-Betaal tales.

The twenty fifth story went like this: Once there was a king in the South who had a lot of relatives. The relatives always eyed the king’s throne. So once, they got together, conspired against the king and usurped the throne. The king had to flee the kingdom with his wife and daughter. They travelled through dense forests. Some robbers happened to see them and attacked them. The king asked his daughter and wife to run away and save themselves, while he himself engaged the robbers in a massive fight. But, as he was outnumbered by the robbers, they easily managed to kill him. The queen and her daughter witnessed everything, but kept hiding in the bushes for fear of getting caught. The robbers looked for them for some time and then left to get treatment for their wounds that they had received in the fight.

In the meantime, a farmer and his son came to the forest on horses. They saw the footprints of the ladies, and were impressed. The son decided to marry the lady with the smaller feet while the father decided to marry the lady with the bigger feet. After walking ahead for some distance, the farmer and his son happened to meet the two women hiding in the forest. They consoled the ladies and told them of the plan of marriage. They consented. But as luck would have it, the bigger feet belonged to the daughter and the smaller feet belonged to the mother. So the son married the mother and the father married the daughter.

Betaal then asked this question to Vikram, “How are the children born on both the sides related to one another?” Vikram was speechless as he could not get any satisfactory answer. So, Betaal was not able to escape this time. He cautioned the king that the so called sage, who was an evil sorcerer in reality, was actually planning to sacrifice the king to please some evil powers that he worshipped. He also told Vikram how to get rid of that evil man. The king killed the evil sorcerer in that manner. Before departing, Betaal asked the king to ask him for some boon. The king requested that the stories which were told to him, be told time and again in history.” Betaal granted his wish and vanished in thin air.

Vikram Betaal: The Four Boys Who Made a Lion

Vikram Betaal: A Promise Not Kept