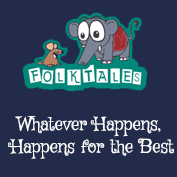 Once there lived a man called Sthira, in a very small village. Though he was very old, he lived alone and did all his work himself. He was extremely popular in his village and was loved by all. The old man also had a son who had left the village to study at a faraway place. The villagers often felt sad seeing Sthira alone and told him, “We feel sad that you have to live away from your only son.” Sthira would appreciate their concern, but would always tell them, “Whatever happens, happens for the best.”

One fine day, after finishing his studies, the young son of Sthira returned to the village. The people of the village were extremely happy and congratulated Sthira on the return of his son. The old man thanked the villagers and once again told them, “Whatever happens, happens for the best.”

A few days later, Sthira’s son broke his leg by falling off from a horse’s back. The entire village came to the old man house to show their concern on his son’s injury, and like always, Sthira thanked the villagers for coming and said, “Whatever happens, happens for the best.” The villagers were very surprised and discussed among themselves, what could be good about someone breaking their leg.

Some days later, the local king sent a small army to look for strong and able bodied men, to recruit them in the army. Everyone feared for their life and no one wanted to join the army. But as it was the order of the king, all men in the village with perfect health and body were recruited. The soldiers also came to the old man house, but seeing Sthira’s son with a broken leg, they left him and went away. The villagers once again came to the old man’s house to congratulate him, and even this time Sthira said, “Whatever happens, happens for the best.”