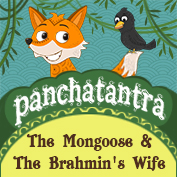 This is a popular story adapted from the Panchtantra. A long time ago, there lived a Brahmin by the name of Deva Sharma with his wife. They were blessed with a son. The baby used to be alone for most of the time as the Brahmin went out to conduct religious rituals and the Brahmini got busy with the household work. The Brahmin, thought of buying a pet animal for the baby who would not only protect the child but also give him company when both the parents were busy. The Brahmini was reluctant but agreed to have a pet later.

One day, the Brahmini had to go out of the house to fetch water from the nearby pond. The Brahmin had also left early for the temple. With a little apprehension, she left the child with the mongoose. Soon after she left, a cobra entered the home. The mongoose sensed the danger to the Brahmin’s son and attacked the cobra. It fiercely fought the cobra and killed it.

When the mongoose heard the footsteps of the Brahmini, it joyfully went out to greet her.The Brahmini was terrified to see the blood stains all over the mouth of the mongoose. She concluded that the mongoose had killed the child. Without a second thought, she threw a heavy box on mongoose which killed it instantly. The Brahmini stormed into the house to see the condition of her child. To her great surprise, she found her child peacefully sleeping in the cradle.

Then she saw a snake torn into pieces lying near the cradle, she realized that the mongoose had saved her child. The Brahmini was full of sorrow and repentance at her hasty action.

Dear children, that is why our elders always say that you must never act in haste. You must think twice before taking any action that cannot be undone.

Panchatantra: The Shepherd And The Wolf