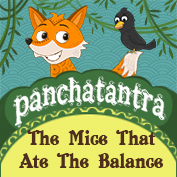 A rich merchant named Jveernadhana used to live in a village. He had a big, prosperous business in the village. But one monsoon, misfortune struck and due to heavy rains, the river flowing by the village overflowed with water, flooding the entire village. Many people and animals lost their lives. Houses, factories, crops—everything was destroyed. The flood caused a heavy loss in Jveernadhana’s business. Jveernadhana decided to move to some other village and try his luck at earning money there. He thought that once he had made sufficient money, he would come back to his native village.

So, Jveernadhana packed up his belongings in order to set off. But, among his possessions was a heavy iron balance. It was very dear to Jveernadhana because he had inherited it from his ancestors but it was not possible for him to carry such a heavy item with him on his journey. He thought that he would keep the balance with his friend Janak and take it back once he returned to his village. He went and spoke to Janak about this and Janak readily agreed. “Of course friend,” said Janak, “I will keep your balance safe for you. You can take it back from me when you return. I wish you good luck for your new business.” Jveernadhana thanked Janak and left for a distant village.

After many years Jveernadhana returned to his village. During this time, he had set up a flourishing business in another town and had become wealthy again. On reaching his village, Jveernadhana went straight to meet his friend Janak. Janak was happy to meet Jveernadhana. The two friends talked amiably for hours about what had been happening in their lives in these past few years. At last, while taking his leave, Jveernadhana requested Janak to return him his ancestral balance. But to Jveernadhana’s utmost surprise, Janak answered, “I’m very sorry, my friend, but I don’t have your iron balance anymore. It was eaten up by the mice in your house.”

Jveernadhana could not believe this at all. He was astonished that his friend would behave like that. He thought to himself, “Mice can’t eat iron!” but out loud, he said, “Oh, don’t bother, friend. Mice are a menace to everyone. It doesn’t matter.”

While leaving, Jveernadhana said to Janak, “Could you please send your son with me to the temple? I am going to make an offering of sweets and I want to send some for you. Your son can bring you back the sweets and also look after my shoes outside the temple.”

Janak agreed and sent his son along with Jveernadhana. But instead of taking Janak’s son to the temple, Jveernadhana took him to a nearby hill and with the help of a strong rope, he tied the boy to a big rock. Then, he returned home.

When it was late and Janak’s son had not returned, Janak got worried and went to ask Jveernadhana about it. Jveernadhana replied, “I’m sorry friend, but while your son was standing outside the temple, looking after my shoes, a big vulture swooped down and carried him away.”

“Nonsense,” Janak shouted in anger. “A vulture can’t carry off a young boy like that!” But Jveernadhana kept insisting that this is what had happened. Soon, their argument got heated and they almost came to blows. Finally, they went to the court to resolve this matter. The judge heard the stories of both Jveernadhana and Janak. He ordered Jveernadhana to return Janak’s son at once or he would be imprisoned. Janak replied, “But, My Lord, how can I do that when a vulture has carried off the boy?”

The moral of this story is that one should never try to deceive a friend.

Panchatantra: The Bear And Golu, Molu