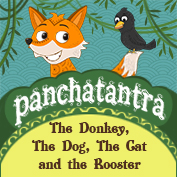 On his way, he met an old dog that was crying uncontrollably. The donkey asked him, “What is the matter, my dear friend? Why are you crying?” The poor dog replied, “My master used to love me very much till the time I was young and alert enough to guard his house. But now age has caught up with me and I am not able to catch the thieves. So, my cruel master has thrown me out of the house.” The donkey replied, “The same thing happened to me. So I have decided to go to Calcutta to become a musician. Why don’t you join me?” The dog agreed to accompany the donkey and together they set out for Calcutta.

On their way, they both met a cat who was crying horribly. The dog and the donkey asked him, “Why are you crying?” The cat replied, “My master brought me to this house when I was very young. I could catch a lot of rats every day and my master gave me lot of milk to drink. But now I have become old and cannot catch rats anymore. So my master has turned me out of the house. I am crying because of that.” The donkey and dog were very sorry to hear the cat’s story. They asked her to join them. The cat thought it was a very good idea and then the donkey, dog and the cat started walking towards Calcutta.

Walking ahead, they met a rooster that was weeping bitterly. The donkey, dog and the cat asked the rooster, “Why are you crying?” The rooster replied, “My master brought me to this house when I was young. I used to wake up early morning and wake him up so that he could go to work early. He also used to give me good food. But now I have become old. I keep sleeping till late in the morning. So, I am not able to wake him up and because of this, my master has kicked me out of the house.” Then the donkey, dog and the cat told the rooster, “We are very sorry to hear your story. We also became old and our masters are not giving us food. So we decided to go to Calcutta to become musicians. Why don’t you come with us?” The rooster thought it was a very good idea and joined them.

By the evening, the four friends got very tired of walking. They were feeling very hungry. Then, the rooster climbed up the tree and noticed some light coming from a distance. They thought maybe they would be able to find something to eat there. So, they followed the source of light and when they reached there, they saw that the light was coming from a big house. The rooster volunteered to fly around and find out who lived inside the house. He found out that the house belonged to three robbers and they had a lot of food stacked up in the house. The four friends were starving by now, so they spoke to each other and made a plan.

The donkey stood with his legs on the window. The dog stood on him. The cat stood on the dog and the rooster flew and remained on the top. All of them started singing at the same time. The robbers who were inside mistook the four animals for a strange looking ghost and ran away.

The robbers who had run away were also hungry. They were watching their house from far away. One of them came back to the house sent to see if everything was all right. That robber slowly entered the house through the back door and went into the kitchen. He wanted to see whether there was milk on the stove.

When he reached near the stove, the cat jumped up and scratched his face. The robber was terrified by this sudden attack and ran outside. The dog, who was lying near the door, bit his leg. He ran near the wall. The donkey kicked him and threw him on the roof. The rooster who was there on the roof, pecked all over him with his sharp beak.

The robber jumped from the roof and ran to his friends. He told them in a shaking voice, “That ghost has now entered our house. It scratched me, bit me, kicked me and pecked me. We must never go back there.” The other robbers agreed and went away. The donkey, the dog, the cat and the rooster lived happily in that house and gave up the idea of going to Calcutta. At night, all of them used to practice music.

Panchatantra: The Heron And The Crab

Panchatantra: Brahmadatta, Crab and The snake