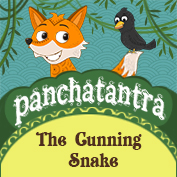 A brown snake called Mandvishya used to live near a pond. This pond was the home of many frogs of all sizes and varieties who lived there happily under the reign of the king frog. On the other hand, life for the snake had become difficult as he had grown old and weak and was unable to catch his prey for his meals as easily as he could earlier.

One day, the snake thought of a trick. He went to the edge of the pond and lay there pretending to be extremely sick. The frog king noticed that the snake had been lying there for hours and, although scared of going near him, asked him what the trouble was. The snake replied, “A few days ago, a priest’s son tried to kill me with a stick. So I bit him in self defence and he died on the spot. The priest was infuriated and he cursed me that from now on I will survive on the mercy of frogs. I will have to serve frogs and accept whatever food they give me. So I am here at your service.”

The king frog was astonished to hear the snake’s story. But at the same time, he and his ministers were very happy too as they had got a snake to serve them. The king frog and many of his ministers hopped on to the back of the snake and the snake took them for a joyride around the pool. The frogs were having a very enjoyable time. The next day, they sat on the snake’s back again and went for a joyride. But the king frog noticed that the snake’s speed had decreased. He asked him the reason for this. The snake replied, “I’m sorry but I have been moving constantly and I have had nothing to eat so I have no energy left now. I can’t move at all.” The king frog was worried that he might not be able to enjoy any joyrides in the future because of the snake’s weakness. So, he permitted the snake to eat a few frogs.

This went on and the snake started eating the frogs one by one, easily. Soon there came a day when there were no frogs left in the pond except the king frog. So the snake went up to the king frog and said, “You are the last frog left in this pond. Since I can’t go hungry, I must eat you.” Saying this, he attacked the king frog like a flash and gobbled him up. It is truly said that you should never trust your enemy.