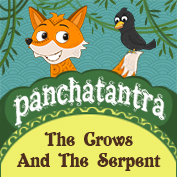 Once, a long time ago, a pair of crows used to live on a huge banyan tree that stood on the outskirts of a village. The crows were living there happily and peacefully until one day a snake arrived and made his home in a hole at the bottom of the banyan tree. The crows were not happy about this, as they felt threatened with a snake living in the same tree. But, there was nothing that they could do about it.

A few days later, the female crow hatched some eggs and baby crows were born. But one day, when both the crows had gone out to get food, the snake slithered up the tree and ate all the new-born baby crows. When the crows came back to their nest, they found their babies gone. They searched everywhere but could not find them. They were deeply grieved at the loss of their babies.

Time passed and in due course, the female crows laid more eggs and when they hatched, more babies were born. This time, only the male crow went out in search of food and the female crow decided to stay back and keep an eye on the babies. But the snake was so greedy that he did not care that the female crow was in the nest. He knew that he was stronger than her. So he crept up the tree and attacked the baby crows. The female crow tried her best to fight off the snake. She struggled against him to save her babies but, no doubt, she was not as strong as the snake. A few other crows also came to the rescue but by that time, the snake had already gobbled up the baby crows and crept back inside his hole.

This kept happening. Every time the crows’ eggs hatched, the snake would go up and eat the young ones. The crows were greatly distressed. They wanted to get rid of the snake and raise their babies without any threat. They also thought of leaving that tree and going to live on some other tree but since the tree had been their home for several years, they could not bear to leave it.

Finally, the crows decided to consult a wise fox who was their friend. They went to the fox and explained the whole matter to her. The fox thought about it for some time and then told them their plan. She said, “This business must be put to an end. I have a plan of killing the snake. Listen to me carefully and do just as I say. There is a river not very far from your tree where the ladies of the royal family take a bath every morning. They leave all their ornaments on a tray which is kept on the shore and their guards keep a watch on these ornaments from a distance. Tomorrow morning, you should go to this river bank and pick up a necklace in your beak. Make sure that you make a lot of noise so that the guards can notice you. Then fly away with the necklace as the guards chase you and drop it into the snake’s hole. When the guards reach this place, they will try to retrieve the necklace from the hole. And when they see the snake there, they will kill him for fear of being bitten. I am quite confident that if you play your parts properly, this plan will succeed.”

So, the next morning, the crows prepared themselves to follow the plan chalked out by the wise fox. They flew to the river bank and saw the place where the ornaments were laid out. Then, the female crow picked up a necklace in her beak and flew off while the male crow created a loud sound to attract the guards’ attention. As expected, the guards started running after the crows waving their sticks at them. Soon, they reached the banyan tree. The female crow quickly dropped the necklace in the snake’s hole and both the crows flew away.

The guards saw the necklace being dropped in the hole and went to get it back. While they were trying to retrieve the necklace from the hole with the help of a stick, the snake came out of the hole. He saw the guards and hissed at them. The guards were afraid that the snake would bite them so they immediately killed him with their sticks. Then, they took the necklace and went back to the palace.

The crows were watching all this from a distance. They were both happy and relieved. They thanked the fox for her clever plan and returned to their tree. Thereafter, they lived peacefully in their nest where they raised their children without any threats.

The clever plan of the wise fox helped the crows to kill a much stronger enemy. That is why it is said that intelligence is greater than strength.