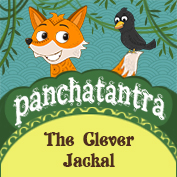 Once, a clever jackal used to live in a thick forest. One day, while roaming around in the jungle looking for food, the jackal discovered a huge dead elephant. The jackal was very happy. He had found food that would last him for many days. But when he tried to eat the elephant’s flesh, he found that his teeth were not strong and sharp enough to tear through the elephant’s thick skin. So, he made a plan and decided that he would wait until some other animal passed from there.

Soon, the jackal saw a lion coming in that direction. Quickly putting his plan into action, the jackal said to the lion, “My Lord, please come and eat this delicious elephant. I have guarded it against all the other animals especially for you.” But the lion haughtily replied, “I don’t eat stale animals. I only eat fresh ones,” and walked away.

The jackal was happy that he still had the whole of the elephant’s body all to himself. After a while, the jackal spotted a tiger approaching him. On seeing the tiger, the jackal got scared that the tiger would eat the whole elephant himself and the jackal would not get anything to eat. So, he quickly made up a story and said to the tiger, “I saw a hunter kill this elephant with a poisoned arrow. So now the elephant’s flesh must be poisoned. Whoever eats this elephant will also get poisoned and die. So, I am sitting here to warn everyone.” The tiger believed the jackal’s story and went away.

After waiting for quite a long time, the jackal finally saw a leopard coming his way. The jackal was aware that a leopard could easily cut through the elephant’s hide with his sharp teeth. So, he put his final plan into action. He said to the leopard, “You seem hungry, my friend. Would you like to take a bite of this delicious elephant? A lion killed him and he has put me on guard while he has gone to get his family. I will give you a warning as soon as I see the lion coming and you can run away.”

The leopard immediately agreed. He started cutting through the elephants hide with his strong, sharp teeth. As soon as the jackal saw that the leopard had cut through the skin and was about to bite into the flesh, he shouted, “The lion is back! Run!” At once, the leopard leaped up and without even glancing back, he run into the forest.

The jackal was happy. He enjoyed a hearty meal of the elephant’s flesh for many days together.