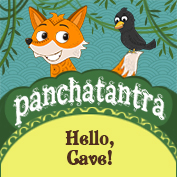 A long time ago, a lion named Kharankhara used to live in a forest. The lion had grown very old and weak. He was unable to hunt for his food anymore. This was a great source of worry for him. He thought that he might starve to death. One day, as he was roaming around in the forest, desperately trying to look for some food, he came across a cave. The lion thought that there must be some animal living in the cave. Suddenly, a plan struck him. He thought that he would go and hide inside the cave and when the owner of the cave returned, he would kill him and eat him. So, he went inside the cave and hid himself.

After a while, a fox approached the cave. The cave was this fox’s home. As the fox was walking towards her cave, she happened to look at the ground. She was surprised to see the footprints of a lion going inside the cave but not coming out of it again. The fox wanted to make sure that the lion was inside the cave so she thought of a trick.

She stood some distance away from the cave and called out, “Hello, cave! I have returned. May I come in? Why aren’t you replying, dear cave? Speak to me as you always do.”
When the lion heard the fox, he thought that this cave must really be a talking cave. He thought that maybe the cave was not replying to the fox because of the lion’s presence inside it. He was worried that if the cave did not reply, the fox might leave it and go to reside in some other cave and thus, he would miss his chance of having a meal.

So, trying to be smart, the lion thought of replying to the fox, pretending to be the cave. He roared out, “I have not stopped speaking to you, dear fox. Please come in and make yourself at home.”

The clever fox immediately knew that the lion was hiding inside the cave. She said, “No one but an absolute fool would believe that a cave can speak,” and ran for her life as fast as she could.

Panchatantra: The Jackal And The Drum