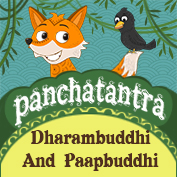 Once, two friends called Dharambuddhi and Paapbuddhi lived in a village. Dharambuddhi was an intelligent and wealthy man while Paapbuddhi was a cunning fellow who was not satisfied with his wealth. He wanted to make more money. He made a clever plan of earning much wealth, with Dharambuddhi’s help.

First of all, Paapbuddhi convinced Dharambuddhi to go with him to the city in order to make money. He told Dharambuddhi that he was wasting his talent in that small village and that if he was in a larger city, he could attain name, fame and wealth. Dharambuddhi agreed with Paapbuddhi and soon, both of them set out on their journey to the city.

In the city, Dharambuddhi earned a lot of wealth as well as fame. After having earned much money, Dharambuddhi and Paapbuddhi decided to go back to their village.
As they were on the outskirts of their village, Paapbuddhi said to Dharambuddhi, “Friend, I don’t think it will be wise to take all of our wealth to the village with us. Our relatives might ask for their shares and there will be the danger of thieves too. So, for now, let us carry only a little money and bury the bulk of it under this tree here.”

Dharambuddhi thought that this was a good idea. They dug a pit under a huge, hollow tree and both of them put their money in it separately. They covered the pit carefully and went to their homes.

But the next night, Paapbuddhi sneaked quietly out of the village and went to the place where the money was hidden. He dug up the pit and took all the money—his own as well as the money belonging to Dharambuddhi.

After a few days, Paapbuddhi went to Dharambuddhi and said, “I have finished my money, friend. Let us go and take out some more.” So, Dharambuddhi and Paapbuddhi went to the hiding place together and dug up the pit. But they found that there was no money inside.
Paapbuddhi immediately accused Dharambuddhi of having stolen all the money. Dharambuddhi was infuriated. A heated quarrel began and finally, both of them went to the court to sort this matter out.
The judge heard both sides of the story. Paapbuddhi said to the judge, “My Lord, if Dharambuddhi denies stealing the money in my absence, the only witness is the tree under which the wealth was hidden. In my opinion, the court should question the tree about this matter.” The judge agreed. A date was fixed when the court would visit the tree and question it.
In the meantime, Paapbuddhi went to his father and said, “Father, you must help me. You know that I stole Dharambuddhi’s share of the money. Please help me or I will get caught and be imprisoned.”

Paapbuddhi’s father was also a dishonest man like Paapbuddhi. He replied, “I don’t want to lose all that money. Tell me what I will have to do.”
Paapbuddhi explained, “We hid our wealth under a huge, hollow tree on the outskirts of the village. The court is going to question the tree about the thief. All you have to do is hide inside the hollow of the tree and when anyone asks who the thief was, say ‘It was Dharambuddhi’.” Paapbuddhi’s father understood and agreed.
On the fixed date, the judge and Paapbuddhi and Dharambuddhi went to the tree in question. The judge asked the tree, “You are the only witness to this crime. Tell us who the thief is.”
They heard a voice from inside the tree saying, “It was Dharambuddhi.”

The judge was astonished on hearing this. But Dharambuddhi’s mind was working in another way. He laid dried leaves all around the tree and set fire to them. The onlookers could not understand what Dharambuddhi was up to. Soon, the flames leapt up and smoke filled the whole area. In an instant everyone saw Paapbuddhi’s father rushing out from inside the hollow of the tree, half-burnt and yelling for help.

The judge understood everything. It was clear to him that all of this had been a part of Paapbuddhi’s evil plan. He charged Paapbuddhi with the theft and punished him. Dharambuddhi was given all his wealth back. Everyone was happy that Dharambuddhi got justice and Paapbuddhi was punished for his greed and dishonesty.

Panchatantra: The Heron, the Serpent and the Mongoose