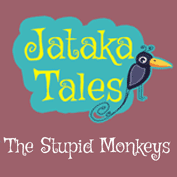 Another great story from Jataka Tales. Once upon a time a king gave a holiday to all the royal workers in his kingdom. The king’s gardener also wanted to avail a day’s holiday but he had to water the plants at the royal garden. It was summer time, and he could not leave the plants without water. He knew that if the plants died, he would have to face the king’s wrath. So, he thought of assigning the task of watering the plants to someone else.

Just then he saw some monkeys having fun and frolic in the king’s garden and got a strange idea. He approached the chief of the monkeys and said, “You must consider yourselves lucky to be living in the royal garden. You get to play on the lush green trees and eat the fresh fruits from the garden. You must do something to show your gratitude towards the king.” All the monkeys were listening carefully to the gardener. The gardener further added, “The king has given a day’s holiday to all the royal workers. But, I cannot go anywhere as I have to water the plants. If you agree to water the plants for one day, the king would be very happy with you and I would also be able to go out with my friends.”

The chief of the monkeys readily agreed to do the job and said, “We shall be glad to do that for our generous king.”The gardener gave the watering pots to the monkeys and went away.
When the monkeys began to water the young trees, a query popped in their mind. They asked their chief, “How shall we know when each tree has been given enough water?” The chief of the monkeys scratched his head for a while and said, “Pull up each young tree and look at the length of its roots. Give more water to the trees with long roots, and only a little to the ones that have short roots.”

Then the stupid monkeys uprooted all the trees of the garden to see which trees had long roots and which had short roots. When the gardener came back the next day, he was taken aback to see the deplorable condition of the royal garden. He could do nothing but repent over his act of foolishness.