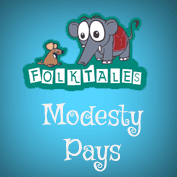 Happy and excited, one of the neighbors went to the driver’s house and told his wife, “Look! It’s your husband driving the Prime Minister.”

The wife felt extremely proud and happy and ran out to see him. She saw her husband drive the chariot and waved at him enthusiastically. The husband, however, ignored his wife and drove past her proudly.

The wife felt very sad and humiliated. When he came home that evening, the wife refused to speak to him. On coaxing a lot, the wife replied that she wanted to divorce him.

The driver was in complete shock.”Why do you want to divorce me suddenly? Are you not happy with me?” asked the driver.

The wife angrily replied,“This morning you ignored me completely and drove past me. You must learn something from the Prime Minister; he is so humble and sat in his chariot with such great modesty. You are just his driver and still you are so arrogant. I don’t want to stay with you.”

The husband realised his mistake and tried his best to become as humble as possible.

“My wife, sir, she admonished me for being arrogant and rude. So I am trying to be a better man,” the driver said.

The Prime Minister was impressed and appreciated his efforts. He took him to the king, told him that he was a man of great virtue and had the ability to rectify his own mistakes.

The king recognised his virtue and promoted him to an official position in the ministry.

From then on, the driver discharged his duties with great passion and modesty and lived happily with his wife.

International Folk Tales: Why the Warthog Goes About on His Knees

International Folk Tales: How the Dragon Came to be

The monkey, the shark, and the washer-man’s donkey