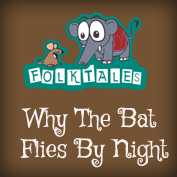 Once upon a time, a bat and a bush rat were the best of friends. The bat was known as Eminog and the rat was called Oyot. They had most of their meals together. The bush rat was very fond of the soup prepared by the bat.

One day the bush rat asked the bat, “How can you manage to cook such tasty soup every single time?”

“There is a trick. Every time I make the soup, I first boil myself in the water. My flesh is very sweet and that’s why the soup turns out to be so tasty.”

The bush rat did not believe him and said, “I don’t think you can do that.” The bat told him that one day he will show him how to do it.

A few days later, when the bush rat came to the bat’s place for dinner, the bat got a pot of water. He told the rat that it was boiling water. He jumped into the water and came out after some time. In reality, it was simply a pot of warm water. After some time, he served to the rat the soup to the rat that he had made beforehand. The soup tasted as good as ever. The bush rat was very impressed and decided to make a similar soup himself.

He went back home and told his wife that he was going to make some very tasty soup and asked her to boil some water. His wife did as she was told. When his wife was doing some work, he suddenly jumped into the boiling hot water and died immediately.

After a while, the wife searched and searched but could not find her husband. Suddenly, she looked into the pot and was shocked to see her husband’s dead body.

The wife was extremely angry and complained to the king about the bat. The king ordered to have the bat arrested. The king’s entire army went out to catch the bat, but he flew far away as he sensed trouble. All day the army would go around searching for the bat, so the bat was forced to change his habits. He hid in the bushes all day long and came out only during the nights.
Thus, bats can now only be seen at nights.