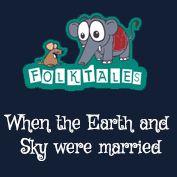 (A folk tale retold from ‘When the World was Young’, by Verrier Elwin. The book has an interesting collection of folktales from the tribal regions of India. Elwin was an anthropologist who spent his entire life researching about tribal people.)

They believe that there was a time when the sky and the earth were husband and wife and lived together. There was no existence of the sun or the moon and only the earth and the clouds were together.

Human beings were very small in size, as the clouds were right above the ground, squeezing the tiny little human beings. They were so small that they had to use rats to plough their fields instead of oxen. If they wanted to pluck any vegetables like tomatoes or brinjals, they had to stand on tiptoe to reach them on the trees, just like plucking mangoes. Life was extremely difficult as their heads kept banging against the clouds while they walked. They were frustrated and fed up.

One day, a very old granny was sweeping her courtyard. As she moved her hand to sweep with the broom, her hand hit against the sky. Hurt with the impact, the granny lost her temper and gave the sky a very hard push. The sky flung like a rocket and reached up, where it is today.

The human beings were finally relieved and started growing tall ever since.