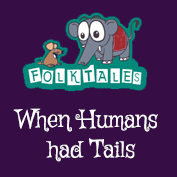 In Orissa,a part of the eastern region of India,lives a tribal community called the Saoras. They believe that there was a time when human beings had long tails which they swished along, sweeping the floor.

But soon it led to a lot of trouble. The human population kept on increasing and managing the tails became really tough. In the market place, at marriage parties and even inside their own homes, people were constantly stepping on one another’s tails. They starting tripping on each other and hurt themselves badly. Life became really difficult and painful.

One day Kittung god visited a very tiny market. While he was buying something, someone stepped on his tail. He tumbled and fell on the ground. His face hit against a stone and a couple of his teeth broke and fell out. The people who were watching this incident, burst out in laughter.

Kittung felt very angry and humiliated. He pulled off his tail and threw it way. All the other tails saw this and,out of fear, fell off on their own; they ran away from there and never returned.

Gradually, the chopped off tail of Kittung god, turned into a palm tree and the tails of the rest of the humans turned into blades of grass. This grass was then used to make brooms.

Just the way human tails once swept the ground, now it was the brooms that were used to sweepthe ground.