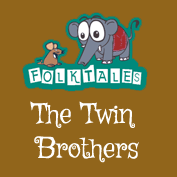 Once upon a time, there was an Aruba king called Ajaka. He had several wives but was particularly fond of one of them. Unfortunately, she gave birth to twins.

During those days, there was a rule to destroy twins as soon as they were born and the mother was also to be killed along with them. But the king loved his wife very dearly and did not have the heart to kill her. He asked one of his nobles to secretly take the mother and the twins to a remote place where no one would ever be able to find them and they could be safe forever.

The noble did as he was told and took them to a secret place. The twin brothers lived with their mother and grew up together. They were very fond of each other and loved each other very dearly; in fact, they were inseparable. They had similar thoughts and likings and even finished each other’s sentences.

One day, their mother fell ill. She was on her deathbed when she informed her sons about their royal origin and died soon afterwards. Since that day, they dreamed of returning to their own kingdom and regretted the law that kept them away from their own country.

One day, the news of their father’s death reached their ears. They heard that their father never had any other son and after his death, the kingdom was left without a king as there was no heir to the throne. The brothers thought that they must go to the kingdom and claim the throne. They decided that one of them would become the king and he would share the wealth of the kingdom with the other, equally. However, they were unable to decide which of them should be the king.

It was a difficult task to choose who should go for the claim, so they decided that they would throw a stone and whoever throws the stone farther will become the king. The younger brother’s stone went farther than the elder one’s.

So, the younger son went to the kingdom and claimed the throne. With the consent of the people, he soon became the king and within a very short time, he sent for his brother. They both started living together in the palace and the elder brother was treated with complete respect and given all the luxuries of the palace.

A few months passed like this. But gradually, the elder brother started getting jealous of all the attention, power and respect that his brother got as the king. One day, while the two brothers were taking a stroll alongside a river, the elder brother swiftly pushed the younger one into the river. He fell off and drowned immediately. The king disappeared and the brother told the people of the kingdom that he had left the kingdom and wanted his brother to become the king.

As the twin brother of the king, he was the obvious heir to the throne. Soon, he was made the king and started ruling the kingdom.

One day, while he was passing by the river side where he pushed his brother, he suddenly saw a fish rising up from the river, and it started singing, “This is where your brother lies.”
The king was extremely afraid that the people of the kingdom would find out, so he killed the fish with a stone.

Another day, while he was crossing the same place, the river itself rose and started singing, “Your brother lies here.” This time, the king was accompanied by his nobles. The nobles became suspicious and took a look into the water and found the body of their king. The people were horrified to learn that their present king had killed his brother. They immediately rejected the king and he was thrown out from the kingdom.

The king was unable to take the humiliation and committed suicide by consuming poison.