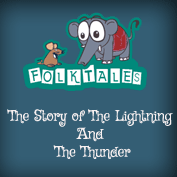 Once upon a time, Lightning and Thunder lived on the earth, just like other people. The king was, however, not happy and made them live at the edge of the town, far away from the other people.

Thunder was an old sheep and Lightning was her only son, a ram. Lightning was very mischievous and whenever he got angry, he destroyed trees and burnt down houses. Every time Lightning caused any harm to anyone, Thunder, the sheep used to get very angry and scold him in a very loud voice. But Lightning hardly ever listened to his mother and continued causing damage to everyone. Gradually, people got very irritated with Lightning and finally complained to the king about him.

The king was concerned about the people of his town and ordered Thunder and Lightning to go out of the town and live by themselves in the faraway bushes. However, that did not make much of a difference. Even now whenever the ram lost his temper, he would scream out loud and burn the forest. At times, the fire from the forest would spread from there and burn the village houses.

The people were scared and worried and once again reported the matter to the king. The king was very angry this time. He was concerned about the well-being of his people. He decided to banish the mother and the son. He ordered them to leave the earth and go and live in the sky. Since then, Lightning causes fire and destruction whenever he is angry and his mother continues to scold him loudly, asking him to stop the destruction. That is why you can always see the bright Lightning on the sky and hear the loud Thunder right after that. Sometimes when the mother is tired or doing some other work, you can still see Lightning causing fire but the mother’s voice is nowhere to be heard.