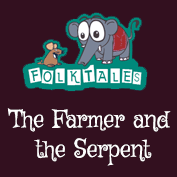 Once, a farmer’s son was on his way to meet his friends. It was late at night and the roads were dark. There was a young cobra resting on the street. Unable to see in the dark, the farmer’s son stepped on the cobra’s tail by mistake. He realised what he had done immediately and tried to escape, but it was already too late. The injured cobra was furious and lashed at him with utmost fury and delivered a bite with its poisonous fangs.

Soo,n the news reached the farmer. He was completely grief-stricken. He was extremely angry at the snake and decided to kill it at once. He immediately took an axe lying nearby and ran to kill the snake. The snake was terrified at the sight of the axe and tried to escape, but it was too late. The farmer managed to strike the snake with his sharp axe and chopped off its tail.

The extreme pain and the sorry sight of the severed tail, made the snake burn with rage. It decided to take revenge on the farmer and in the next few days, killed a large number of the farmer’s cattle by biting them one by one. The farmer was very fond of his cattle and they were also a source of a large part of his income. The farmer made several attempts to trap and kill the snake. However, he failed each time as the cobra escaped smartly.

The farmer became helpless and decided to end his clash with the snake. The next day, he took a bowl of milk and honey and went to the cobra’s lair.

He called out to the cobra. The cobra was surprised to see the farmer and tried to escape, when the farmer said, “Please don’t go away. I have come here to make peace. You killed my son because he hurt you and I tried to kill you as revenge for my son’s death. I think that both of us are satisfied now and we should stop trying to harm each other. We must forgive and forget. Here, accept my gifts and let’s make peace.”

The cobra wasn’t ready to call it a truce and said, “No, I can’t accept any gift from you. You can never forget your son’s death and I can never forget the loss of my tail. We will always be suspicious of each other.”

Since then, humans and snakes could never become friends and have always looked at each other with suspicion.